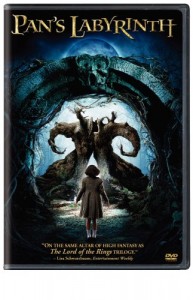 Guillermo Del Toro has never taken the easy way out. Not never.

When he got his Hollywood break with the ‘giant bug’ movie Mimic he crafted it with more care than a hundred Michael Bay’s – even though it was always going to be a ‘giant bug’ movie. When he took over the Blade franchise he took it in incredible new directions. When he got his superhero it was one no-one had ever heard of, and worse he didn’t really want to even be a superhero.

All three of these films are indisputably Del Toro, but for whatever reason weren’t as personal as he would like. Think of them as the films he would make about subject matter he might not select. Therefore every few years Del Toro heads back abroad to make the films of his dreams. There is no meddling from studios, no ‘change this’ notes, no wondering about if ‘this will hit the right demographic’, or if it is ‘working’. Here Guillermo Del Toro is truly the boss of his own domain.

Perhaps the best of the bunch is Pan’s Labyrinth.

If you need more evidence that Del Toro will not be kow-towing to an American audience you need only wait until the opening credits, which are stubbornly in Spanish from go to whoa. Read it or weep – miss the movie and go back to the latest Paul W.S. Anderson ‘arthouse’ flick.

It is Spain. 1944. The fascist army forces are trying to quell scattered uprisings from the poor, impoverished and ill-equipped rebels that hide in the cold dark forests. One such outpost is run by the most brutal and sadistic Captain Vidal, a Government loyalist determined to wheedle the rebels out and dole out punishment by any means necessary – unfortunately for those weak of stomach, these methods can be extremely graphic and violent indeed.

Into this grim world comes Ofelia and her pregnant mother Mercedes, who has married Captain Vidal for the protection and security it affords. Ofelia is a pre-teen girl with a vivid imagination and a free spirit. She is also not Captain Vidal’s daughter, a fact he constantly makes exceedingly obvious. The child Mercedes is carrying is Vidal’s son though, and he is equally determined to ensure the boy safe passage into existence, even at the expense of the health and wellbeing of other family members.

But Ofelia’s imagination will simply not permit her to be constrained by the depressing and grim ‘real life’ existence, especially as her mother is not handling the pregnancy well and is becoming ever more ill. She rapidly comes to realise that in the woods near the outpost exist magical beings, and an intricate fairytale is rapidly intertwined into her life. The principal being in an underground labyrinth near the outpost is a tall, awkward looking and creepy sounding faun, who informs Ofelia that she is in fact Princess Moanna, the daughter of the Underworld. 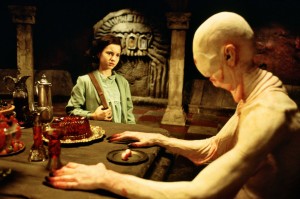 The faun gives Ofelia a magic book that sets her a series of tasks, each more dangerous than the last, and all bringing her in close proximity to some of the more fantastic creations derived from the mind of Del Toro. This magic world – often beneath huge trees or behind magic doors – is a stark juxtaposition to the drab, muddy outpost setting, with bright colours, amazing creatures and astonishing imagery.

I should also point out that these tasks would be beyond most adults, and Ofelia is braver than Sharon Osbourne’s bikini waxer.

As Ofelia moves toward what she believes is her destiny the rebels near the outpost close in, using knowledge and supplies from insiders in the camp. The finale of the film alternates back and forth between the fantasy and the reality, with genuine bad guys in each world. Captain Vidal is a bona fide prick in any language, with his snap judgments often leading to equally sudden bloodshed and his rationalising of the value of life often reprehensible.

But this is no ordinary fairytale folks. In both the real and imagined world the sense of despair and unease is palpable, with moments of shocking graphic violence occurring frequently. Let’s just say rabbit poachers would be wise to drink their wine from casks… This often makes Pan’s Labyrinth very hard to watch.

Some will write it off as too difficult or unworthy. They will miss out. This steadfast adherence by Del Toro to not compromise his vision should in fact be acknowledged and extolled, and this film is an astonishing creation.

This is the darkest of dark adult fairytales, uncompromising, visionary and often difficult. It is not afraid to place a young child in great danger and to give the bad guy the upper hand even when the audience is pleading for a happy ending.

Final Rating – 8.5 / 10. No Hollywood sell-out moments here, only the most personal creation from one of the most visionary directors in the world. I love Blade 2 to death, and have said previously and often that Guillermo Del Toro is a genius; Pan’s Labyrinth may go down as his finest moment.