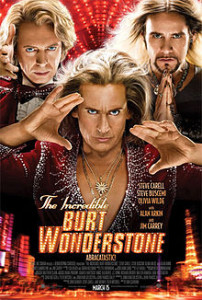 Burt (Steve Carell) embraced magic at a young age. Actually found solace in it is more an apt description, as pulling rabbits out of hats keeps you off the streets where the bullies are. He and the equally captivated friend Anton (Steve Buscemi) forged a partnership, devised some tricks and developed an act that they honed until it was Vegas ready.

Then… they went to Vegas, where they headlined a major casino for a decade using that very act. The only problem being that they never thought to change, improve, enhance. As tends to happen over time people grew tired if the same shtick and tricks routine, they looked for something else.

The biggest magic trick in The Incredible Burt Wonderstone is how they managed to make all the jokes vanish. I was expecting a Zoolander type comedy lampooning the magic industry instead of male fashion. I got something far closer to the next lazy Will Ferrell sports film.

Everything else pans out like a lazy ‘How Burt got his Groove back‘ special, as if someone sketched out the chapter titles for the DVD release and no-one else got around to filling in the script with plot and above all jokes.

Buscemi’s role is underwritten and frankly could have been played by anyone. Olivia Wilde brings a wide eyed innocence as perhaps the only aspiring magician in Vegas who actually cares about her craft, the straight woman to a bunch of guys who aren’t nearly wacky enough to require one. James Gandolfini too plays a dangerously normal casino owner who, unlike the film, insists on embracing the new and scrapping the old and stale, and Alan Arkin snoozes his way through the ‘wise elder statesman’ role that seems mandatory these days.

A film about magicians should embrace the stupidity and cartoonishness. Only Jim Carrey as a Criss Angel style lunatic street magician even tries to go too far, which given he dubs himself the ‘Brain Rapist’ shouldn’t be too big a newsflash. There’s a film somewhere where the Brain Rapist does his thing, unfortunately it isn’t this one.

I almost feel bad for Carell. At one stage he was the guy poised to take us beyond the Ferrell and Sandler ‘but yelling is comedy!’ phase. Now he is just another guy churning out decent two minute trailers with no substance behind them.

The Incredible Burt Wonderstone isn’t the film that will make his career disappear, but like the titular lazy magician he needs to stop burning bridges and spitting in every outstretched hand offering assistance, lest he too become a sepia toned memory of past glory.

Final Rating – 6 / 10. Every time I watch something like this I just want to go home and watch Zoolander 57 more times…