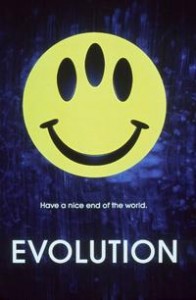 I don’t get it either.

Featuring a cast of nobody’s favourites and a premise that has been used before (and will again be used in the future), Evolution probably sits somewhere halfway between the monkey and the upright striding man in the diagram representing Darwin’s theory. It isn’t the work of chimps, but given its proclivity for fart jokes and Julianne Moore’s constant pratfalls it can hardly be described as highly evolved either.

A meteor hits earth near Arizona, disrupting an aspiring fireman as he attempts to ‘save’ a blow-up sex-doll from a non-burning building (don’t ask). Two teachers are called in to investigate, Harry (Orlando Jones) and Ira (David Duchovny), the ‘fireman’ Wayne (Sean William Scott) looks on.

The next day Harry and Ira realise that the samples they took at the site are growing… evolving… at an astronomical rate, with no signs of slowing down. They grow very excited just as quickly, but decide to make no announcements or to inform no-one, lest they find their ‘discovery credit’ taken from under their noses.

Unfortunately when they head back to the landing area they swiftly make a second discovery, that the army and FBI have moved in. So much for naming rights… The pair make themselves immediately known to the powers that be, including General (Ted Levine), and scientist Allison (Julianne Moore), a woman with whom Ira has shared a past, and who has the unfortunate tendency to stumble, trip and launch headlong into and over things constantly. Just how she can perform intricate and careful study and experiments is beyond me, as well as why her endless pratfallery is supposedly hilarious.

Despite the manpower and forceful warnings from Washington it seems only Harry and Ira have their eyes open. They are the only ones – until Wayne inevitably joins them in their search – who twig that the continually evolving beings are becoming smarter, bigger and more dangerous, and similarly are the only ones who seem to know that they have moved far beyond the restricted crash zone.

Watching the clumsily CGI’s beasties run amok over town is moderately amusing, and Jones and Duchovny share an effortless chemistry and try their best to make as many of the bad jokes as funny as they can. But when this film has been made before with Arachnophobia, Eight Legged Freaks and even Tremors there is only so far they can take the material.

Final Rating – 6 / 10. Evolution is silly, harmless and to be frank a waste of time. To the credit of Duchovny and Jones it is at least a pleasant waste of time.