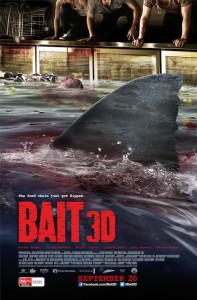 “This is just why I don’t normally shop here!”

The primary ingredient in any decent shark attack movie is stupidity. We know in advance that while sharks are essentially tiny brained eating machines driven only by instinct, that if we stay out of their way – i.e. the ocean – there is a fair chance that we will not be eaten.

So to put oneself in the way of mindless killer fish – repeat: FISH – all it takes is a bit of common sense and a few seconds of rational thought.

Which brings us back to the stupid. Here it is endless, both onscreen and off, in front of and behind the camera. Whoever came up with this concept is as brilliant as they are moronic.

After the obligatory ‘Gee whillikers a SHARK!’ scene that sees a guy and gal lose their best mate and brother respectively, Bait takes a dramatic turn for the pedestrian. We have no less than 20 minutes (of an 80 odd minute film) devoted to meeting and not caring about a whole range of clumsy stereotypes; the reluctant hero, the girl, the cop, the crim, the innocent and harmless; therefore fishfood… as they gradually gravitate toward the same coastal shopping centre.

(Here they pause for a moment to all talk inanely in an accent that vacillates between awful American and strained Australian, without ever really settling on either.)

Now get ready for some primo stupid.

A snap tsunami rolls in with zero warning and zero after-effects like the cartoon Tasmanian Devil, all ferocity, movement and damage. The shopping centre is immediately awash, and wouldn’t ya know it all the exits are strategically blocked. Apparently (and I mean ‘apparently’) the sudden tidal wave has left literally more than half of the shoppers and staff dead, amazing considering it lasted only seconds and only seemed to damage the entrances and exits. Sure an unfortunate few might have been crushed or pinned underwater by debris but this was hardly the physical embodiment of the Mayan 2012 prophecy.

And what of the absence of after-effects? Surely with a huge killer wave that size a… gee I am putting way too much thought into this ‘shark in a shopping centre’ film.

Anyway let’s just assume that all of the above could happen. It’s time for dinner.

The huddled masses, among whom are the vaguely recognisable and the ‘is that guy still around?’, as well as numerous nobodies, all move to the top of the shopping aisle racks to stay dry and discuss what the future holds. Maybe a quick call to the weatherman to ask how the hell he missed that incredible wave? Still others remain stranded in the basement car park either in or on their vehicles.

Within minutes they realise that they are trapped – again a staggering outcome that defies all logic – but hold that thought Abigail-May here comes Flipper!

More accurately Jaws Jr, obviously moments before riding the huge wave before being swooshed through the automatic doors in order to lazily browse the canned tuna aisles.

Describing more would be both a disservice and pointless, a muppet could churn things out from here. And in the case of Bait someone did.

Consider a man wearing a shopping trolley drowning in water possibly a foot higher than his head. Consider again the couple wondering how to get out of their submerged car for what seems like eons, only to realise the sunroof is both available and dry. Above all consider why this bunch of morons risked life and limb to hook a giant Great White shark in aisle 3 with no thought behind what happens next? I mean were they thinking it would tow them all to safety? An absolute classic example of a long scene that has absolutely no purpose aside from putting the Bait in close proximity to the Great White hunter.

Despite all this I laughed often during Bait. Not always when the filmmakers intended I would venture. But last year a ham-fisted effort called Shark Night was released that contained absolutely no humour, no genuine scares or entertainment value of any kind. Bait realises it is a silly little CGI assisted shark movie with no real reason to exist and embraces all of the deficiencies that the genre offers. The scares are silly and obvious, the CGI frankly pretty awful and the premise ridiculous. But I’d much rather watch this again than half the films I have seen this year.

The most aggravating thing in the entire film was the constant butchering of the American accent, with a bunch of Australians intermittently trying in vain to sound like Americans, with the usual outcome being that they sound like dumb people from neither here nor there.

Final Rating – 6 / 10. Consider the Australian made Bait as the Antipodean equivalent to Anaconda, only on probably a quarter of the budget.