A Tribe Called Quest – hereafter just Tribe – were a hip-hop powerhouse over a towering three album span, them unfortunately something went awry. Whether it was complacency, a lack of inspiration or the end result of internal ructions isn’t important, just know that ‘Midnight Marauders’ is the last meaningful release in their CV, and where you should stop reading if you wanna see this end on a happy note. 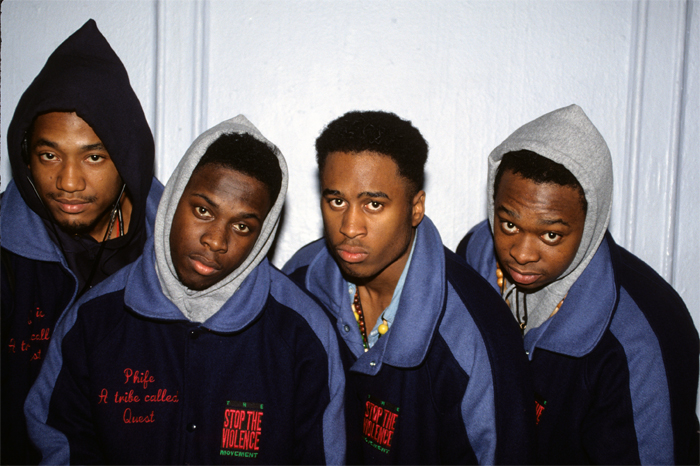 The guy far right is named Jarobi. I know, me neither…

A four member group – I seriously only found out they weren’t a trio a few months ago when I watched the doco about their tumultuous break-up sparked by rappers Q-Tip and Phife Dawg  butting heads – Tribe ignored the gangster stuff and braggadocio of other notables of the era in favour of clever wordplay and smooth flows, making tunes more akin to peers and fellow ‘Native Tongues’ De La Soul and Jungle Brothers. 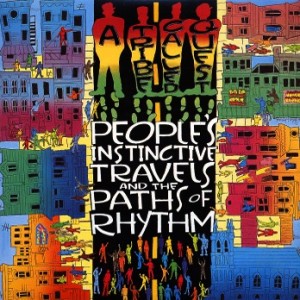 People’s instinctive travels and the paths of rhythm 1990

‘People’s instinctive travels and the paths of rhythm’ is far more than a pretentious title; it is a bold statement of non-conformity and sounds as fresh now some 22(!) years since release.

Opening with the nearly 8 minute ‘Push it Along’ ‘People’s’ boasts 14 bouncy tracks highlighting Q-Tip’s nasal deadpan flow and Phife’s scratchy voice. (Let me put this out there early, Phife’s contributions improved over the career but without ‘Tip the Tribe were persona non grata. He set the scene and provided 98% of the lyrical high points.)

Everyone – even non hip-hop heads – knows ‘Bonita Applebum’, though they might not know it’s a love letter to big asses. ‘Can I kick it?’ is a little more dated now, but features one of the most effective samples in hip-hop, resulting in Lou Reed’s ‘Walk  on the wild side’ snippet being heard more in this track than the original

Some of the lyrical subject matter is light and fluffy, ‘I left my wallet in El Segundo’ is a long rambling tale of an oversight on a boy’s weekend away, ‘Luck of Lucien’ outlines a French immigrant and ‘Description of a fool’ highlights the requirements to get in the Tribe’s shitlist. Of course when it comes to tackling the big issues ‘Pubic Enemy’ gives STD’s their moment in the sun and ‘Ham ‘n’ Eggs has a chorus about the dietary limitations of the titular meal, so maybe light and fluffy ain’t so bad.

Perhaps overlong and with the requisite between song noodlings and unnecessary segues, People’s is nonetheless an adventurous, inventive debut. Clearly Q-Tip’s album, Phife getting maybe 5 verses total over the 60 odd minutes, the production at this early stage is less creative than it would become, and samples feature far more prominently, but People’s Instinctive Travels and the Paths of Rhythm is dazzling debut and different to anything in hip-hop at the time.

And (for a while) it would only get better. 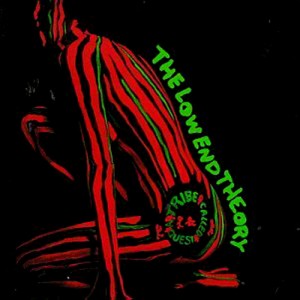 How to do justice to one of the more important albums in my collection? Let’s just start by calling ‘Excursions’ the best Track 1 in history, with closing track ‘Scenario’ one of the more upbeat hip-hop tracks in decades. And the 12 songs in between aren’t at all bad either.

Tribe made better songs (aside from Excursions) on other albums, even ‘Find A Way’ from the awful ‘The Love Movement’ would stand above most of these tracks, but they never made a better album, and for that matter neither did nearly every other artist of the era. (It seems to me that tribe got lazier as their career progressed, releasing more overtly commercial radio friendly singles and including an increasing number of filler tracks in each album.)

The Low End Theory though is a breathtakingly consistent effort, Phife enjoys his best moments on this album and Q-Tip is as effortlessly listenable as ever, with some of the more quoted lyrics in rap (Gangstarr would use numerous Tribe snippets for the immortal ‘A Long Way to go’) and in truth Phife’s best contribution to rap music might just be his perfectly timed ‘Yo!’ to open his coming out party song ‘Buggin’ out’.

The production here is also more noticeably confident and assured with the samples being distorted and blended into the background to allow the songs to stand on their own feet.

The only thing the album misses is a classic radio friendly single, yet that fact still isn’t enough cause to consider The Low End Theory as anything other than a modern day masterpiece. 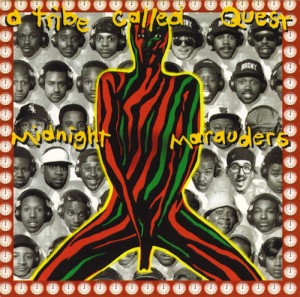 Another album. Another classic. With a cover that features headshots of a who’s who of hip-hop luminaries wearing headphones, and a musical content that stands alongside anything any of them could create.

Midnight Marauders was the most commercially successful Tribe album and contains two hands down Five Star perfect tracks, ‘Award Tour’ – featuring a sing-song chorus from Trugoy (later Dave) of De La Soul – and ‘Electric Relaxation’, one of the better produced songs ever.

Midnight Marauders enjoys the same highs as The Low End Theory, but is saddled a little by a little more filler as the album progresses, I could also do without ‘Sucka Nigga’, which only serves to highlight the confusion the epithet creates in society as it alternates between (kinda) OK and reprehensible, leading to dumb moments like Rihanna throwing a tantrum last year when she was lazily described using the term in an article, despite the fact she uses it in her lyrics. Pick a side and stick with it.

Marauders would be the proudest achievement of most groups, but for A Tribe Called Quest it will need to settle for runner-up status. 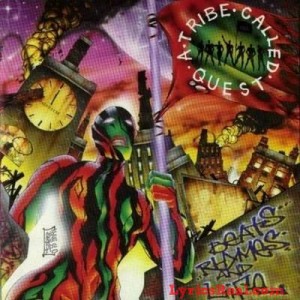 Apparently created amid unease between the group (according to the Doco), ‘Beats’ was the first album that Tribe released after I discovered just how good they were, so after much anticipation I took my new purchase home and played the hell out of it. For a week or two…

Initially we made fun of the opener ‘Phoney Rappers’, with the slightly slurred hook sounding just as much like ‘Bunny Rabbits’ as the title. The single ‘1nce again’ and closer (and subsequent single) ‘Stressed Out’ was undeniably pleasant – with all the baggage that word entails – ‘Beats’ saw altogether too many flat spots over the course of 15 tracks, with the arrival of a new guest rapper consequence who seemed to be as prominent as Phife over the disc. Again this disconnect between the band members was as much a result of internal ructions and the fact that by now they all lived very separate lives, only catching up to make music.

Phife described making this album as ‘like a job’, and it sure sounds at times like a product more than an example of creative expression.

A few months ago I threw away a bunch of CDs as I no longer listened to the albums and had all the key moments on my iPod, the acid test to whether you actually really, truly appreciate an album is when it is in your hand hovering over the bin. I paused only for a moment before dropping Beats, Rhymes and Life into the waiting waste receptacle, later realising that the pause was more in recognition of the group than the actual album. 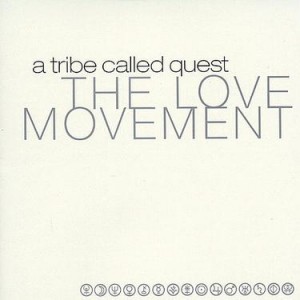 Speaking of difficult choices, I spent all of 0.000013 seconds before happily turfing this lazy mess in the garbage. In fact now all I can recall from this blandness is that aside from the admittedly excellent ‘Find A Way’ and the fact Busta Rhymes guested I cannot add another fact without wikapedia-assistance.

The sound of the album might best be described as smooth, though not in a good way, sorta like how I find Michael Buble smooth to the point of audio invisibility.

A Tribe Called Quest hung around too long to leave a good looking corpse, ‘The Love Movement’ is a lazy, bloated and unfortunate full stop to this story. A disappointing fade out to a brilliant career. 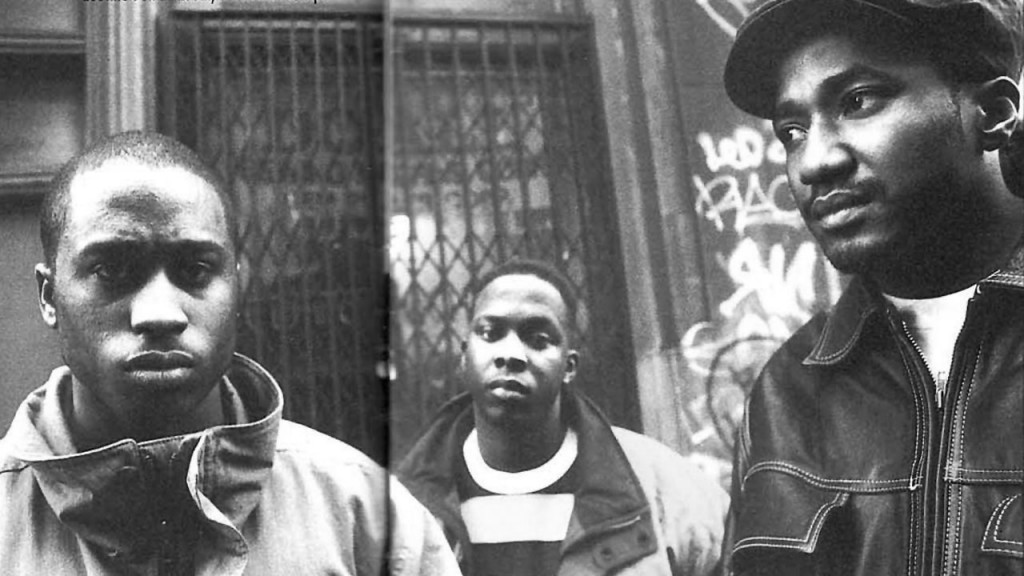 P.S. Yes Q-Tip has since gone out and released a few solo albums, he is yet to produce anything remotely necessary…

While I try to throw a joke or two into proceedings when I can all of the opinions presented in my reviews are genuine. I don't expect that all will agree with my thoughts at all times nor would it be any fun if you did, so don't be shy in telling me where you think I went wrong... and hopefully if you think I got it right for once. Don't be shy, half the fun is in the conversation after the movie.
View all posts by OGR →
This entry was posted in Love & Hate, Music, OGR Recommends, Showin' Lurve. Bookmark the permalink.

1 Response to A Tribe Called Quest Discography – A Musical Timeline