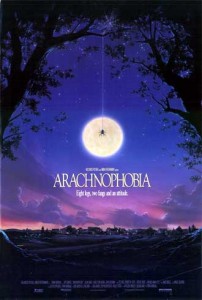 It’s the attitude that kills you.

Everybody knows that Jaws turned many free and easy water lovers into bona fide sand-fans, too afraid to go more than ankle deep for fear of becoming shark bait.

You already know if you are afraid of spiders. If you are, this movie will do nothing to change your mindset. If you aren’t, Arachnophobia doesn’t make a compelling enough argument to convert you.

When a giant spider from the deepest unexplored regions of the South American jungle stows away in the baggage of an American funded expedition he heads straight to the rural digs of Ross (Jeff Daniels) and Molly Jennings. I should mention here that Ross is deathly afraid of spiders…when will that information prove relevant???

Ross, Molly and their two young kids have just moved from the big city so that Jeff can take over the practice of the longstanding, stubborn, cantankerous – but most importantly retiring – Dr Metcalf, who does an abrupt about face and decides he might hang around for a while longer yet.

As it happens the Jennings’ and the eight legged squatter move in simultaneously, the family into the spacious new two storey farmhouse and the spider into the barn out back. They all settle into their new lives, unfortunately this means that spidey immediately hooks up with the hottest arachnid in town, spawning thousands of deadly hybrid spiders that spread far and wide across the small town.

When the locals inevitably start dropping like flies suspicion is cast upon the skills and abilities of Doc Jennings, after all in a convenient twist of movie fate he happens to have been the most recent doctor to have dealt with them. Of course initially no-one believes that it could be spiders responsible for the spate of deaths, but eventually the specialists are called to consult.

The first specialist is Dr Atherton (Julian Sands), an insect expert and the man who coincidentally ran the operation that led to the spider’s entry to the US in the first place. The second is Delbert (John Goodman), a self confident bug spraying doofus who is indisputably the best character in the film.

For the first 80 minutes of screentime the spiders seem content to act like normal spiders for the most part, they scuttle around perilously close to ankles, hands and children without doing damage unless someone steps on them. But with around 15 minutes to go it is as if they all decide to host a surprise party for the Jennings’, with practically every eight legged freak in the postcode jumping out simultaneously, much to his petrified delight.

(For all I know they all said ‘surprise’ as well, but it was lost among the screams.)

Of course this ending is as unlikely as it is entertaining, and totally necessary for a horror-comedy with a bias towards the comedy. It wants to spook not scare, so that each shock provokes laughter instead of screams. As a result Arachnophobia is almost a family friendly, entry level horror film. And in that genre, it succeeds.

Final Rating – 7 / 10. Without the antics and ramblings of Delbert and the over the top finale it would be a pretty scare- free affair for non-arachnophobes, but those two elements make it a worthy – if largely harmless – flick.