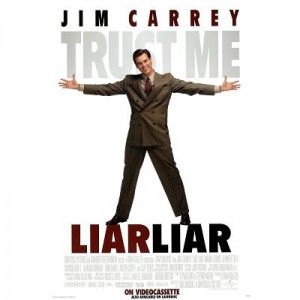 “I swear the fish was this big!”

When Jim Carrey was on (and his shtick was not yet tired), all that was needed was for someone to point a camera at him and let him go.

In Liar, Liar Jim Carry is ON.

Carrey plays Fletcher, a lawyer so dedicated to career advancement that he has destroyed his marriage and is now in danger of losing his own Hollywood adorable 5 year old son. So after yet another Daddy no-show the son makes a birthday wish – that Dad can’t tell a lie for 24 hours.

Did I mention he’s a lawyer? Yeah, that might prove difficult, especially with a big hearing the next day and a defense so threadbare that creative testimony and leading questions are practically mandatory.

That’s the irrelevant set-up, the film is a showcase for the freestyling antics of Carrey, who over-acts in that way that initially makes you laugh, then roll your eyes, then laugh again even harder. Watching Fletcher try to tell himself that the blue pen in his hand is red is a joy to behold. I don’t think anyone else in the 90s could have pulled the scene off and made it funny.

Once Carrey realises what he is facing it becomes a race against time, a siege designed to keep the truth at bay until the day elapses and he can get back to normal, as in fake. Of course it seems that Fletcher can’t take a turn without running smack dab into someone that he needs to lie to but can’t, leading to uncomfortably honest responses after moments of Fletcher wrestling with his intent.

Liar, Liar is hardly original, but it flies thanks to Carrey. It gets saccharine near the end when Fletcher realised ‘what is really important to him’, but a decent cast and a ‘Let Jim go’ strategy makes this a 90s comedy that holds up well.

(Unfortunately a few years ago they took exactly the same premise with Yes Man, but the moment had long since passed both Jim and audiences worldwide.)

Final Rating – 7.5 / 10. Works well as a reminder that in his prime Jim Carrey left your Sandlers, Ferrells and Jack Blacks in the shade.