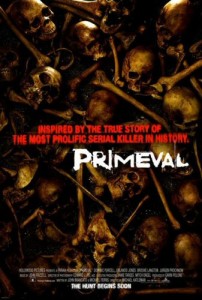 If this is indeed ‘inspired by true events’, then I can only guess someone saw Anaconda, Rogue and similar films and thought ‘I am truly inspired to make money from a lazy premise; crocodiles!’.

Primeval is your standard giant beastie stalks a few semi-known actors and actresses and a group of unknown faceless fodder, assisted by silly plot turns (and nowadays) scads of CGI.

In the past couple decades Africa has garnered a reputation as perhaps the most dangerous continent on Earth. This image is only furthered by to the news and films like Blood Diamond, Tsotsi and Hotel Rwanda. I would have thought that it would have been a mite unfair to add a killer croc to the mix, nonetheless that’s what we have here.

In this case it seems a giant crocodile named Gustave has been terrorising locals in Central Africa for decades, chomping on humans frequently up and down the river, which unfortunately represents the lifeblood of humanity amid the dry inhospitable terrain that surrounds.

I had to laugh when in the early scenes the filmmakers found it necessary to give us subtitles naming the village and roughly where it was located, like where this fabricated giant creature film apparently takes place is remotely important.

A few half hearted attempts are made to track and trap Gustave with no success, so the area appears doomed to a future where he periodically snacks down on his version of human crackers.

Then Gustave takes a white woman. Oh shit. Someone done fucked up now…

The inevitable ‘get to the bottom of this’ crew includes a fearless journo to juxtapose the sincere thoughtful one, a crocologist, and a streetwise black cameraman (he wears FUBU!). They team up with gonzo and dangerous expert tracker *cough* poacher, played by Jurgen Prochnow, who despite being the most recognisable name or face in the film, is nonetheless a virtual unknown. Seriously, try to name one of his films. I’ll wait.

Moving on, all that is left is how the beastie will look once he pops up, how many he takes with him, who if any of the primary cast become toothpick targets and how they kill him.

The answers to the above questions are regrettably all ‘doesn’t matter really’. Gustave looks OK in his so obviously animated way, but you never get any sense of danger that any of this is real, which is also perhaps why the entire cast phone in their performances. Something about a low budget formula film starring a CGI animal might do that to you.

Gustave has a GPS tracker implanted in him but for much of the film he appears to be the one that keeps finding his pursuers, a romantic subplot is dabbled with and thankfully ignored, and the inclusion of bad humans smacked of filler and/or desperation. Probably both.

Final Rating – 5.5 / 10. There are only about four scenes where Gustave gets his chance to prove that he is truly CGI – Corny Gustave Imagery, one of those looks reasonably cool, the other two merely make you wait a little longer until the blessed arrival of the credits.