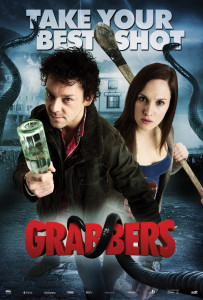 Now admittedly ‘grabbers’ is hardly a very scientific name, granted only after research, analysis and careful consideration, but once you realise the source of the name is the town drunk (actually one of many town drunks) it makes more sense.

And to be absolutely fair when we finally meet the alien creatures they do tend to be quite grabby.

They arrive in classic sci-fi fashion, in a large bright shooting light hurtling from space towards earth. First the fishing boat goes missing, then the whales run ashore with carcasses that appear more than a little nibbled on, then large spherical objects are found with things inside.

Garda (police) Lisa has no idea what they are and where they came from. She only arrived on Erin Island to get away from the hubbub of the big city by taking a relief posting for a couple weeks, only to find that the other cop on duty, O’Shea, is constantly liquored up himself, on duty and off.

The first grabber is actually quite small and resembles an octopus of sorts. The second is bigger. Much bigger. After Lisa and O’Shea present the discovery to the local nerdy scientist it is agreed that this indeed a ground-breaking discovery, and potentially a troubling one.

(A couple of minutes of) research shows that the ‘grabbers’ survive on water but crave blood, but only ‘normal’ blood not tainted with alcohol, which seems to kill the grabber parasite – remember this it might be in the test afterwards…

Without water they die, though very slowly. But at least this means that they aren’t sucking back human blood at a population altering rate. Now is probably a good time to mention that a huge storm is nearing Erin Island and is due to hit that very evening, and that the storm is to be so fierce that there is no chance anyone can arrive to lend assistance if things go awry.

So with one night to survive, a grabber-empowering storm on the way and the only thing capable of turning off the greedy grabbers from their pursuit of human blood being a high blood-alcohol content, the options are few.

In fact they are one; all night pub lock in with free booze for all.

But it’s way too hard to shtick to a plan when you’re pished.

If the basic premise sounds a little Tremors-like then you are spot on. Graboids become Grabbers, isolated desert becomes isolated island, cheesy underground effects become cheesy overground effects, with both methods thankfully effective in their own way. The mega-grabber itself looks very realistic (as far as giant alien creatures go) and moves with unnerving speed and movement.

Grabbers is proudly a low budget film that steals openly from many other genre classics. In a 90 second span near the finale there are both Predator and Aliens references. In clumsier or lazier hands this would undoubtedly be infuriating, but Grabbers is well crafted and pleasantly amusing in a low key way.

And if you have to steal, might as well steal from the best.

Final Rating – 7 / 10. It won’t dislodge Tremors from your DVD collection (you own Tremors right?), but it’s a welcome companion piece to that film and Black Sheep in the world of silly low key horror.