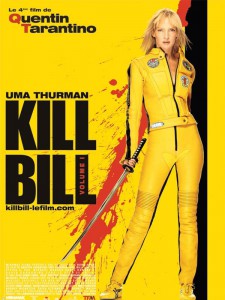 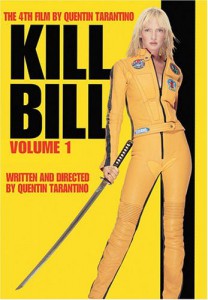 Quentin Tarantino’s 2 part ode to Uma’s 2 feet is an impressive but skitzophrenic effort.

At times brilliant and inspired, at others indulgent and lazy, like he padded things out to build publicity and be seen as even “kookier” than he already was. I think this is far more renowned for what it sets out to achieve than for what it actually is. Furthering that point if Tarantino hadn’t already made Pulp Fiction and Reservoir Dogs this would have hardly raised a ripple upon release, homages to old styles of cinema come out every year, Black Dynamite is a good example from last year.

This is still good stuff though, but let’s not get ahead of ourselves. Like Kanye West has an ear for identifying the one or two second grab that listeners will repeat and enjoy Tarantino has become the ultimate “Hook-Director”. Except Tarantino loves being talked about more than he loves selling movies and making cash, so he thinks more along the lines of “Gee, what will get them talking?”

Exhibits A through E in this case:

B/ The Pussy Wagon. 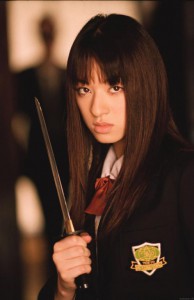 E/ A 6 foot tall blonde white chick with a samurai sword and a bright yellow outfit!

I could draw a parallel between Tarantino making an average flick and adding all these hooks and a crappy car with all the trimmings but I think Tarantino is a little better than that, at least in the past. So Kill Bill is a base level BMW with mags and a nice paint job, better than most in its class but still no top of the wozzer freeway beast.

I love Tarantino and most of his stuff, but I seriously think he is now reached a point where he is happier talking about his next project and how amazing it will be than he is actually making the thing. Take the press for Death Proof where he spoke more about the films that inspired him, Kurt Russell’s amazingness and Zoe Bell’s other films rather than his own film. Probably with reason… Death Proof sucked.

6/ The finale has The Bride (Uma) chopping up around 60 highly trained, masked sword carrying henchmen and one giggling snaggle toothed Japanese schoolgirl in around 15 minutes before a womano-a-womano showdown with O-Ren. The version I own has the option to turn the blood “on” or “off” like a videogame… On please. 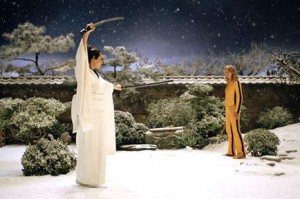 Random thoughts 11(a)/ The characters talk like no-one really talks, but like Tarantino really hopes everyone talks.

2/ The opening stoush has The Bride taking down one trash talking “Oh nuh you didahn’t” Vernita Green (Vivica A Fox), who for some reason breaks to fix her daughter some cereal despite the fact that she just got home from school, I guess Tarantino even edits his meals differently! Thankfully she dies quick, no wonder 50 Cent dumped her.

Random thoughts 1(*)/ Why would Uma’s legs be atrophied through a lack of use but she can kill a guy with only her arms and a door and push the fuck out of a wheelchair? Surely she might have started with “Wiggle your little finger”?

4/ You never see Bill’s face in Part 1, but you hear him a few times, both when he shoots Uma in the face and when he tells Daryl Hannah’s character Elle Driver about how he shot Uma in the face. We get it, you shot her in the face.

Random Thoughts 65(c)/ You know going in that Uma ain’t dying as she is in Part 2, so it is less a matter if rather than “how”.

5/ Lucy Lui is O-Ren Ishi, a Yakuza boss. We get to see all about her in a totally unnecessary (but very cool) anime cutaway that traces her life from childhood to becoming a successful assassin.

Random thoughts 6(e)/ A woman wearing an eye patch and whistling loudly can walk unimpeded into a hospital no probs.

1/ A nameless Uma leaves the life of a highly paid assassin to get hitched… and is shot in the head and left for dead. Even Samuel L. Jackson is shot dead, though we don’t know that he is the dead pianist until Part 2.

Random thoughts 137(p)/ At last a movie that deals with the touchy subject of coma victim rape, truly a scourge of our society.

3/ There is a lengthy scene where we meet the legendary Hattori Hanzo (Sonny Chiba), a weapons maker of great renown who must be talked into handcrafting a magnificent sword for Uma so she can chop up a bunch of Japanese people while wearing a wire harness. 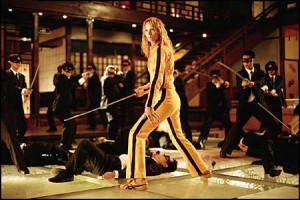 And lastly let’s quickly zip through the absolute kitchen sink of hooky gimmicks that QT throws at the screen:

Final Rating – 8 / 10. Kill Bill is a base level BMW with mags and a nice paint job, better than most in its class but still no top of the wozzer freeway beast.

No wait I said that earlier… oh fuck it. Kill Bill Volume 1 is a good movie, just no classic. Don’t be fooled by all the pretty trimmings.