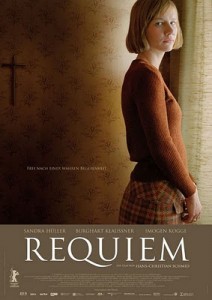 Oh German Gwenyth, things can’t be that bad can they?

There are more exorcism films released each year than there are unnecessary Kardashian shows, and most of them are just as interesting.

To compensate for the over-saturation in the genre exorcism flicks fall back on a couple of tried and true techniques including speaking in tongues, channeling other voices and spirits and the sudden arrival of thunder and lightning. The Kardashians just show their tits and date Kanye West. Each to their own.

Requiem eschews all these histrionics and uncreative attempts at hooker. And you know what? It really suffers for it as a result.

In theory a non-sensationalist approach should be more credible and ideally more impactful and unnerving. This is just dull, taking away any sense of genuine possession and you are left with a nice young woman who gradually becomes unpleasant to be around with no-one knowing why.

‘Based upon real events’ but fictional is the same as fresh / frozen and brand new / second hand. By that I mean it makes no sense. We meet Marianne – who bears an unfortunately striking resemblance to Gwenyth Paltrow – as she prepares to leave her devoutly religious family for the first time to commence university. Her Father is supportive but nervous for reasons different to those you might expect, and Mother is openly doubtful and filled with trepidation.

Marianne attempts to allay all fears by telling her family she will be fine. And she’ll remember to take her tablet each day.

Of course once out of the nest it isn’t long before Marianne gets caught up and neglects this task. Not taking the tablet leaves her open to visitations, voices and being easily influenced by unseen forces.

This is where a Hollywood possession flick would veer off into special effects, randomly opening doors and windows and glimpsed shadows. Not here. Marianne’s best friend Hanna and boyfriend Stefan are mostly oblivious to her tribulations, and for the most part so are we, aside from a sequence where she dances like a woman possessed Marianne is a reserved quiet and thoughtful young woman.

When they finally realise something is wrong they think it may be epilepsy, then she…

Oh who cares? I sure didn’t. Requiem might be competently made and well acted by it is ultimately dull as dishwater.

Final Rating – 6 / 10. Sometimes Hollywood add the sparkles, glam and distractions for a reason, the unpolished product is pointless.