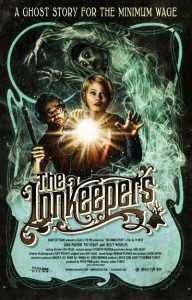 Thankfully the poster is the only thing ‘Old School’ about this film.

House of the Devil was an 80 minute build up followed by crushing disappointment, like a virgin who has saved his pennies and after an hour in the waiting room finds he has arrived at an S&M club to have his testicles smacked around.

And because a review cannot betray the ending no-one got to point out that it sucked.

Now a couple years on Ti West brings us The Innkeepers, and even though this latest effort is a long way from great, it boasts a little more in the (still quite slow) build up, and actually has an ending worth hanging around for.

An elegant but outdated hotel is celebrating its one hundredth anniversary. By closing its doors permanently.

With only one long weekend remaining as a functioning entity the hotel – the Yankee Pedlar – is running on a skeleton crew of two staff, Luke and Claire. The duo are two typical 20ish employees counting down the clock and giving the bare minimum effort.

When not winding up the few guests and napping in any of the many unoccupied rooms Luke attempts to cash in on rumours that the hotel is haunted by a female guest alleged to have died horribly in the hotel last century. He runs a website examining the ghostly possibilities and has Claire patrol the hotel of a night time with equipment designed to take readings and identify spectral phenomena.

One of the precious few clientele is an ex-actress – now faith healer / psychic – who warns Claire that she might be better served twiddling her thumbs as the minutes wind down.

Those who seek trouble are often the first to find it.

In a welcome departure from The House of the Devil, which from memory expected me to sit through 80 minutes of bleh before it rewarded my patience with meh, The Innkeepers at least tries sporadically to wake you up. In true commercial horror form though the first four scares are cheap ones, a couple of ‘Boos’, a dream sequence and essentially a viral email that has been doing the rounds for years in various incarnations.

But while the slow build is interspersed by some clichéd moments at least this film does more than replicate the 70s, more than that it gets to a destination that makes it worth the journey.

It must be hard to make a ghost story, unless you are a true believer in the paranormal it is easy to write off the genre as silly – what with the wailing and people in sheets and all. If you try too hard for a scare a minute you fall into the Insidious trap, only exacerbating the silliness, don’t do enough and you’re boring.

For the most part The Innkeepers toes the precarious line well enough, it builds tension frequently yet wisely releases the audience just a little through minor scares or moments of levity. In truth there is really only one decent scene in the film where the tension and trepidation are earned, at that point I squirmed on the couch just a little.

That scene alone warrants a look at The Innkeepers. There are thousands of horror films around with most ranging from ‘totally sucks’ to ‘mostly sucks’, The Innkeepers has flaws and doesn’t make a whole lot of sense at times, but it isn’t boring and for those few minutes you are genuinely nervous.

That’s why we watch horror isn’t it?

Final Rating – 7 / 10. I would like to take the opportunity to thank Ti West for embracing the… ummm… what is it again…?

3 Responses to The Innkeepers (Review)