The Last King of Scotland (Review) 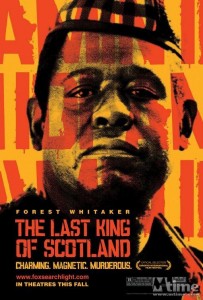 The Last King of Scotland is a film that saw Blood Diamond and Hotel Rwanda and thought “Me too!”. Somehow this inexplicably managed to snare Forest Whitaker a Best Actor Oscar in the process. Look I love me some Forest, but aside from one or two brief scenes this is hardly a command performance, furthermore the more I think about the film the less I want to mention it in the same paragraph as Blood Diamond and Hotel Rwanda.

Given the always scary label of ‘based upon true events’ the central premise of The Last King of Scotland has a cocky young Scot Nicholas (James McAvoy) fresh from medical school performing his first adult act of rebellion by ignoring his awaiting cushy family practice and instead travelling to war torn Uganda to ply his craft and see the world.

The initial culture shock of being in direct competition with a local witch-doctor passes when Dr Nicholas randomly meets the newly minted ruler-by-force Idi Amin (Whitaker), a charismatic, magnetic and often funny leader with a dangerously volatile streak. Amin takes an instant liking to Nicholas thanks to his fondness for the Scottish people, and a broken hand, dead cow and a moment of violent flatulence later and Nicholas finds himself as the President’s personal physician.

OK some other stuff happened too, but not too much more.

As time elapses and the situation in Uganda inevitably becomes more uncertain Amin and Nicholas become reasonably close friends, with Amin trusting Nicholas more than his other advisers, much to the chagrin of the envious and occasionally mistrusting – and mistrustful – politicians, statesmen and… other types.

While Whitaker and McAvoy are perfectly fine – not Oscar-worthy – in their central roles their relationship grows increasing fanciful as evidence piles up against the Joseph Kony of his day Idi Amin. The phrase ‘for dramatic effect’ sprung to mind all too frequently as the enormity of the situation continually increased around the frankly gormless Nicholas, at least if the film is to be believed. I mean just how many innocents and competitors could one man knock off without his ‘close buddy’ not realising? 50? 600? THREE HUNDRED THOUSAND!

I wonder now if the real life Doctor upon whom this story was ‘based’ was as innocent or truly unaware of the reality of Amin’s reign. There is probably a more accurate story of a foreigner in a dangerous land who made unsavoury alliances to stay alive, but I guess that wouldn’t have justified the film they set out to create here.

As it stands the Last King of Scotland features good performances from the two leads but grows increasingly impossible to believe, to the detriment of the film.

Final Rating – 7 / 10. Here is a film that wishes it was Blood Diamond, but ultimately becomes a work of fiction that is probably just as fabricated as the tales Amin tells Nicholas.