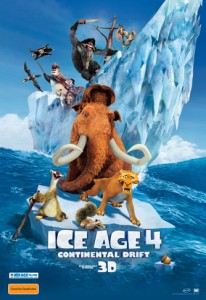 Ice Age 4: Continental Drift follows the unfortunate trend of a franchise frantically grabbing those last few dollars before the audience realises how far it has fallen. In that way I guess it is the same as all those ‘once weres’ who settle for any TV show with Celebrity in the title.

In my review for Ice Age 3 I said “Once you understand that all Ice Age movies are about 60 minutes of movie padded by Scrat skits, simply there to be a kiddie friendly time consuming distractions, you’ll be fine.” Well I can’t hand on heart say that anymore, I need more than a nut chasing squirrel and the inevitable Manny, Sid and Diego must travel with urgency from A to B, especially when the content is as bland and lazy as this.

Manny (Ray Romano) and Ellie (Queen Latifah) are having trouble with their precocious teen daughter – parents just don’t understand and whatnot – leading to a minor rebellion and some unlikely events that leave the three franchise originals separated yet again, and of course having to return just in time to save the hapless family members from encroaching peril.

In other news, Sid gets a sassy no-mess Grandma (Wanda Sykes), Diego gets a love interest (J-Lo, adding voice actor to the lengthy list of things she isn’t good at) and this lame duck series is in desperate need of extinction.

Johnny Legz’ Sid is still one of the most carefully realised characters and voice jobs in animation, but you can’t expect a lazy clumsy sloth to save even something lazier and clumsier than his furry arse.

Peter Dinklage as Captain Gatt, the leader of a band of pirate creatures, adds some timbre and menace to proceedings – perhaps a little too much for the toddlers in fact, but despite numerous ‘ooh that guy’s (Nick Frost and Simon Pegg) voicing minor characters (to please the parents?) no-one but Dinklage and Leguizamo stand out.

And what’s with the trend that every animated film must end with the cast dancing over the credits? In the case of Ice Age 4 it just shows that they have given up on any original elements they once had, to settle for being just like the rest, celeb cameos, pop culture and baby formula.

Final Rating – 4.5 / 10. The same premise as the other 3 films, except less so. IA4 is really 4 scenes crammed in between 5 increasingly frustrating Scrataludes (Dis-Scrat-ions?) I mean really if I wanted to watch a small fuzzy nothing chase something he will never have I’d follow Rob Schneider around the Playboy mansion.