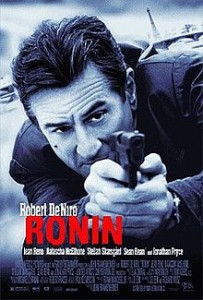 Ronin is an unassuming little action film that differs mightily from the beefcake driven blockbusters of the 90s in that it has a brain, a plot and demands a modicum of attention from its audience. This makes it more a forebear of the Bourne films than The Expendables, and an all too often ignored example of quality low key filmmaking.

As the film opens a small group of hired hands is forming in France (the title ‘Ronin’ refers to a Japanese word meaning ‘masterless warriors’ = mercenaries). These 5 men have differing skillsets and abilities, and have been carefully selected with one job in mind, securing a suitcase from a group of men.

Men who seem quite fond of the suitcase.

While there is no obvious leader among the gents an unspoken hierarchy forms. While the female co-ordinator of operations Deidre might have formed the team and holds the cheque-book, it seems obvious that the most experienced and in control members of the team is Sam (Robert De Niro). Sam is ever vigilant to the point of cautiousness, he measure twice and cuts once, and won’t enter a room without first knowing an alternate safe route out.

This all sounds well and good, and the film does have lengthy sequences involving planning, waiting and discussion, but once the action starts play time is over and it’s down to business. And business is good – to watch at least.

Ronin starts lugubriously and the first hour boasts a lot of dead air, but the second hour produces a worthy pay-off filled with all the action you can handle. As well as some of the best car chases in the last few decades there are backstabbing, explosions and running gun battles in crowded city locations that result in high body counts and incredulous wonderings along the lines of ‘where the fuck are the cops while all this is going on?’.

De Niro makes sure that many of his dry as toast lines hit home in one of his last decent roles before he allowed his career to get all Focked up, and Jean Reno is as always classy and understated. Complementing De Niro is a quality cast of character actors befitting a film requiring backstabbing and intrigue including Stellan Skarsgard, Sean Bean, Jonathan Pryce and Natasha McElhorne as Deidre, practically the only female in the entire sack-heavy film.

While the final quarter hour finds the director feeling the need to ramp up the action even further this is done at the cost of plausibility. This is too bad, I would have much rather a slightly flat ending instead of the slightly silly finale that resulted, especially after a first class patiently established opening 90 minutes.

Fortunately the disappointing taste of the dessert course will soon be forgotten, replaced with the fond memories of the delicious main, the excellent build up with excellent ingredients like car-chases, shootouts and salty dialogue. The dodgy finale might hurt Ronin’s rewatchability, but it can’t prevent you from taking away at least three or four sequences and moments that will stay lodged in your memory for good reasons.

The good far outweighs the bad in Ronin. But the bad nonetheless prevents greatness…