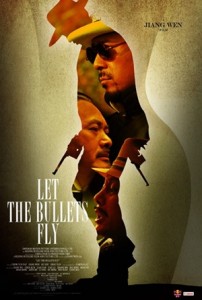 An Eastern-Western, only reminds me that China makes good kung-fu flicks.

Rather than pen a lengthy bagging describing at length all the things I feel are wrong about one of the biggest box office successes in Chinese film history, might I just sheepishly raise my hand and exclaim;

I mean I follow the basics of the plot: Bandidos led by Pocky stick up a train and find that the VIP aboard is actually an imposter named Tang living the good life by claiming a fake identity. Rather than giving up Pocky decides to join the ruse and he and Tang two inexplicably find acclaim as the new governor and counsellor of the new city – conveniently called Goosetown.

The locals swiftly realise that this new governor has more in common with them than many other aloof, cruel and pretentious before Pocky,

But as they proceed to stamp their new fresh style upon the shire they come under the scrutiny of local wealthy mobster Master Huang (Chow Yun Fat), and he and bandit (governor) Pocky play an ongoing cat and mouse to uncover the true identity and undermine the standing of the other.

And all the while the former faux-governor Tang watches on wide eyed as the two imperfect men living perfect lives try to prove each other fake without exposing their own true identities and natures.

That’s what I understand. Here’s what I don’t; why is there so much fake laughter in this film? More than any episode of Family Matters (or M.A.S.H. which had the exact same fake laugh track for decades). But here it is the characters themselves, not a piped in studio audience.

As an action-comedy, why did I not see any action worth pointing out, nor any noticeable genuine laughter resulting from watching the film? (The action such as it was, was of the Stephen Chow obviously surreal and impossible variety, which just doesn’t work for me. )

I’ll leave it at that. I didn’t like Let the Bullets Fly one bit. Maybe if I knew what I was supposed to be laughing and ‘goshing’ at I might be more appreciative, as it is this is one of the worst films I have seen in years.

And Chow Yun Fat hams it up as Master Huang so much I thought he knew too that this was some lightweight trash.