Not to be too crude but Hoodlum is a cinematic cock-tease. It sure looks nice and is well put together, and it is forever manipulating and hinting that ‘summin big will be here soon. Just wait a little longer…’

But nothing ever really (carefully chosen word)… arrives.

The film opens in the depths of the Great Depression in New York City with Bumpy Johnson (Laurence Fishburne) being released from a stint in prison and returning to his elegant and dignified crime boss Madame Queen, to whom he remains intensely loyal.

Madame Queen runs the numbers in the black community, a basic lottery style system which holds many in its vice like grip and is widely seen as the last hope for many poor folks in the area.

However since Bumpy was imprisoned things done changed in the area. No longer is the crime quite so organised, with Madame Queen left to dominate the local market unimpeded. Sauntering menacingly into the area is Dutch Schultz (Tim Roth), a particularly nasty and perpetually aggressive gang boss who’s every second word is ‘fuck’ – with the other often being an even more offensive racial epithet. Dutch enjoys making easy money from the black community and even has many of them on his staff, but he wants nothing to do with them socially and is open and blunt with his offensive opinions.

In fact this film gives a regrettable but probably all too accurate picture of just how casual and rife racism was in that time.

Dutch is a greedy and ambitious maverick. He wants Madame Queen’s turf and doesn’t care who knows it. This brings unwanted attention from the police and legal system – who he buys off and often uses to perform his dirty work – and other more responsible members of the underworld, notably Lucky Luciano (Andy Garcia), who runs the brothels and ‘Gentleman’s Clubs’ in the area.

But back to Bumpy, because it is his story. As the film explains in the opening scene Bumpy ‘is not like other coloured people, he reads and plays chess’, among other things. Upon his release Bumpy teams with longtime friend Illinois (Chi McBride) and of course rejoins Madame Queen. Bumpy is known and respected in the poor areas for being a doer and as one who stands up to the crime lords – it sorta, kinda conveniently neglects the fact that he is one of them. 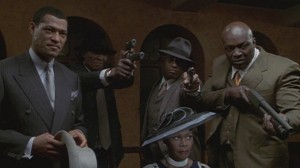 There’s not as much of this as you might think…

All the usual elements of period drama gang wars are here, including montages of hits, the grief of losing beloved friends and innocents, and the eternal threat of having a rat among one’s ranks.

Money – often bribes or pay-offs – moves up the lines of corruption, and eventually so too does Bumpy, much to the chagrin of his pious, proper and above all pacifist girlfriend Francine (Vanessa Williams).

Fishburne is predictably innocent as Bumpy, Chi McBride less expected in his turn as the charismatic and talkative right hand man Illinois. Even Vanessa Williams holds her own in several scenes where she could easily have been overshadowed by Fishburne.

Tim Roth chews through his role as Dutch with gusto, with every hate filled line delivered forcefully, though at times I think his accent strayed a little when he tried too hard.

Among the dozens of peripheral characters are it seems every decent African American actor and actress of the 90s, with Clarence Williams III and Queen Latifah among a bunch of familiar faces.

At a tick over two hours Hoodlum always seems to be building towards something but never quite has the kick to elevate the film despite the mesmerising performance from Fishburne, with whom director Bill Duke teamed with to make the far superior Deep Cover.

I strongly recommend that you check that one out instead.

Final Rating – 7 / 10. Hoodlum comes across as an African American Scarface, without the histrionics and catch phrases that made that film so inexplicably popular.