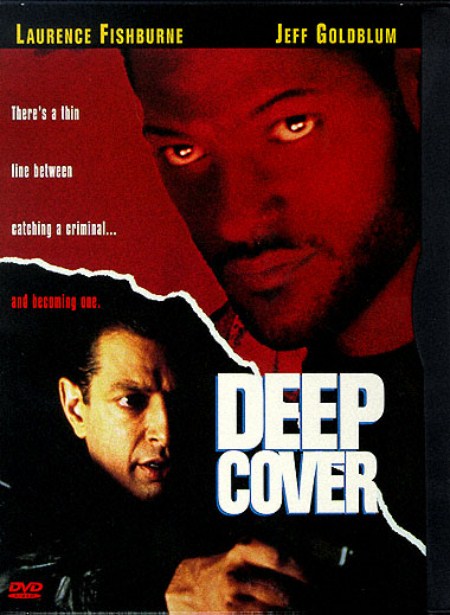 Not sure why Mr Fish is red but whatever. Watch this film.

Russell Stevens (Laurence Fishburne) is driven to be a good, upright and honest man, untainted by evil or tempted into choosing the easy path. In short he aspires to be everything his late Father who was gunned down in front of his very eyes was not. This admirable aim becomes exceptionally difficult when Stevens – now John Hull – goes undercover as a low level drug dealer on the streets of Los Angeles, thrust into a depressing, violent world where the easy way out is not only available, but exceptionally lucrative, a world where illicit temptation is as common as Lady GaGa looks without makeup.

With that set up Deep Cover could quite easily have become another ‘urban’ film about drugs and crime or another twisty thriller too clever for its own good, but three things separate it from the pack and elevate it to greatness. The first is that unlike the scungy lower level crims on the cold LA streets Deep Cover never goes for the easy cop-out, there is only one action scene in the film – a car chase – that actually serves as a pivotal moment, not merely there for aesthetics and stunts.

The second is the intelligence of the plot that clearly shows the pitfalls of addiction and the lengths people will go for a fix, but focuses more on the upper echelons that supply the dealers, the guys with nice suits, fat pockets and for the most part clean hands. Once in these circles John discovers that being undercover is perhaps a little more plush and enjoyable than he expected.

The third is the quality of the cast. Fishburne is effortless elegance personified as the measured and super-cool undercover agent, Jeff Goldblum couldn’t be more purpose built for his role as a slick fast talking lawyer David Jason, a man who has allowed the allure of the fast life to drag him in too deep into a world where he is perhaps ill-equipped, and the supporting cast are all equally excellent.

John starts at the bottom rung of the drug food chain, climbing ever so slowly one rung at a time until he nears the high ups worth pursuing, but as he rises through the ranks the pressure steadily builds, from his unseen superiors who plot and scheme from a dingy office, to the gregarious but deadly drug kingpin Felix Barbosa, a man with a quick temper and an impatience for inefficiency.

Deep Cover is stylish and well acted and directed. It is always compelling and gives a different viewpoint of the crime world that is more human and perhaps contradictory than Hollywood normally opts for. While the body count is low the acts of violence are so well realised that when they take place the impact reverberates. So often the worth of cinematic human life is reduced to flashy shootouts and leaping acrobatically away from explosions, not here. It is in this way – and not because both feature Laurence Fishburne – that Deep Cover is perhaps a companion piece to the equally great King of New York from the same era.

Final Rating – 9 / 10. Deep Cover is well crafted, super-cool and exceedingly quotable, it features classic performances from Fishburne and Goldblum and by refusing to comply with the standard undercover film play-book it wins itself longevity, unfortunately though at the cost of exposure. With the current state of crime driven drama largely confined to TV screens and the cinema releases in the genre best described as moribund, here is a film that deserves more attention. Did in 1992, does now.