The Legend of Awesomest Maximus (Review) 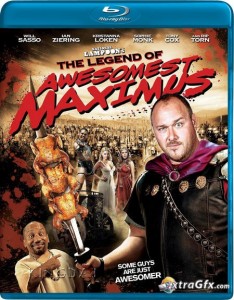 The thing that perhaps infuriates me most about The Legend of Awesomest Maximus is that it isn’t worse. Some time back I was handed a double pack DVD with this and the execrable National Lampoon’s Dirty Movie and made the unfortunate decision of watching that IQ point pureeing embarrassment on celluloid first. Had this flick been as bad I could have quite easily continued turning my back on the Epic/Disaster/Scary/Date Movie spoof unnecessary money spinning phenomenon for good.

Unfortunately this film is only very mediocre and pointless, not nearly as god-awful as I expected.

That isn’t to say that I endorse if for a moment, only I understand how some might find value in the endless gay jokes, silly names and constant nudity…

So many gay jokes. 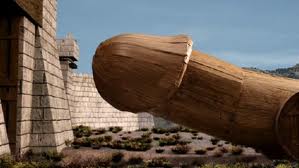 For the most part these films are only valued by easily pleased teens; well that and the paid cast of gormless hack actors, has-been stars desperate for attention, little people and dumb starlets who mistakenly pray that these films will be a stepping stone to greater things, or at least enable a hook-up with a scrub NBA player, washed up rapper or wealthy 75 year old. But while they lazily send up 300/Alexander/Troy/Gladiator and rely altogether too much on inane jokes and caricatures and stereotypes… Awesomest was occasionally amusing, and I must admit the guy that played Erotic, the villainous leader of the Persians was actually quite funny throughout – just not enough for me to bother imdb’ing his name.

You don’t need to know anything else; sends up swords ‘n’ sandals flicks, has non-stop jokes – 97% of which fall flat but some actually work! – and has more tit than three episodes of Californication.

Final Rating – 5 / 10. It’s a long, long, loooong way from good, but just as far away from National Lampoon’s Dirty Movie, for that it deserves commendation.