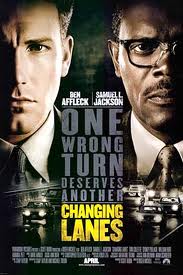 Gavin Baneck (Ben Affleck) is a hot shot cocky prick of a lawyer rapidly rising in the ranks of his big name law firm.

Gavin is on the up.

Telemarketer Doyle Gibson (Samuel L. Jackson) is desperately trying to piece his life – and family – back together in the wake of his alcoholism.

Doyle is trying to halt the slide down.

The following hour shows how this coincidental bingle can have repercussions that resonate for both. Repercussions that create much annoyance and friction between the two men, and much frustration and thinly veiled resentment on my part.

Gavin starts out sleazy, arrogant and deceptive and Doyle humble and desperate, the fact that both evolve through the hours that follow is supposed to cause hope, but the fact remains as far as I am concerned they are both disgusting and reprehensible characters, and I was rooting for them both to lose.

It doesn’t help that they constantly over-react at each turn like sit-com characters, (I’ll just say if this is how Doyle goes on when he’s sober it’s a very good thing he stopped drinking). It also doesn’t help that despite the supposed ‘feel good’ (or less dirty) climax Gavin is actually the Devil – figuratively speaking. A supposed ‘positive’ is that he broke off an in-office affair with another lawyer (Toni Collette), then we learn it wasn’t to do the right thing, but because he feared getting caught. Paragon of virtue right there!

I’ve always said that if you persist in exhibiting scuzzball traits for 95% of the time then you are a scuzzball, regardless of the timing or actions of the supposedly redemptive 5%. (In real life I would actually set the scuzzball-bar at 20%, but films need friction to drive the plot, so I can be more flexible.)

I loathe the fact that film-makers continually provide the audience with two scuzzball characters and ask me to take sides. If you want to make it easy at least have one character mostly good. To paraphrase Robert Downey Jr’s character Kirk Lazarus from Tropic Thunder; “you went full (scuzzball), man. Never go full (scuzzball)”.

Final Rating – 4 / 10. Changing Lanes tells the story of two scuzzballs and wants you to choose between them. Or at least hang around to watch the results. I made my choice, and it’s never to watch this god-awful mess again. I suggest you choose the same.