The Lord of the Rings – The Return of the King (Review) 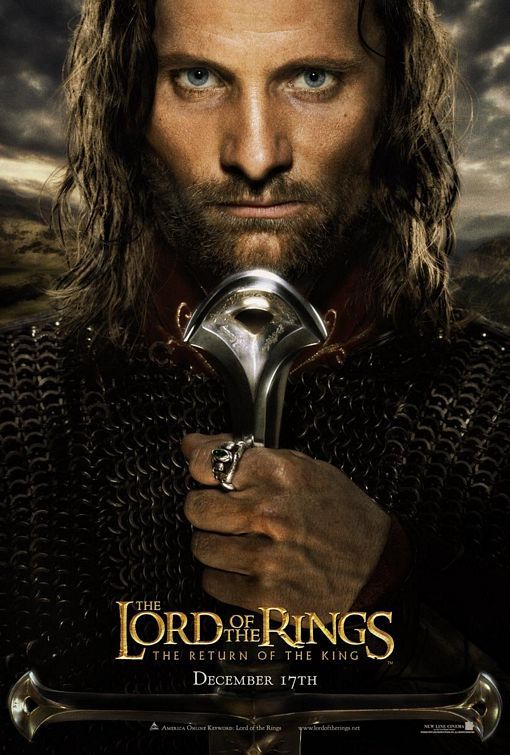 That’ll do Aragorn… that’ll do.

I’ve never wanted to be a hobbit or a cave troll, never had fantasies about banging an elf chick or pretended that my singlet was made of mithril, but I’ll be the first to acknowledge that the Lord of the Rings trilogy is a masterpiece.

Duh, I hear you say, and you would be right. There are so many glowing reviews and LOTR worship sites out there that it would be redundant to write yet another, so as I have done previously with the first two films Fellowship and Two Towers, I bring you a running stream of consciousness commentary written more or less as I watched The Return of the King chapter.

This was only my second viewing I believe since I saw it in cinemas upon release, so it is all reasonably fresh to me.

Here we go to the thrilling conclusion… then the less thrilling one… then the third unnecessary one… then another just because Peter Jackson felt he could I guess.

1st Minute – Aaah, fishing with a friend by the lake. A simpler time for young Gollum, I mean Smeagol. What could be more pleaseant? Hey what has my friend been fortunate enough to find?

4th minute – That went South real quick. Oh well, you can always find more friends, but good jewellery in the greater Mordor area is hard to come by, and this is Rosendorff’s quality!

8th minute – The window has probably passed, but I’m sure if someone released a bread named “Lambas Bread” between 2001- 2004 it would have made some quick cash. I can see the marketing

“Lambas Bread. Approved by 9 out of 10 halflings. But don’t just take our word for it, here are some testimonials from loyal clients.”

“Lambas bread is the only things that nourishes me through an 18 hour Final Fantasy session!” enormussVulcan63

“Since eating Lambas bread my feet are definitely hairier.” Nogirls4mi2day

11th minute – Fucking trees are back. BEGONE! (And thankfully they were.)

18th minute – Sam is jealous of Smeagol. But of course, however we all know that he should have put his move on after Frodo rescued him into the dinghy at the end of Fellowship. He had his chance, and Frodo is a good looking boy with large feet (hint-hint), stands to reason someone else would move in eventually for a crack, (so to speak).

20th minute – Geez how many mystical seeing orbs and portals are there? And why are so many just left carelessly laying around? If I had a mystical orb/portal thingo I’d carry it on me or at least leave it somewhere safe.

25th minute – Just remembered, there are more tearful, huggy farewells in this one than in 25 J-Lo movies. Realistically they’ve been on the move about a week, maybe 10 days? Wait a minute! I don’t remember hugging everyone after Scout camp when I was young… except that group leader. Now that I think of it he instigated all of those hugs! Oh well I guess I earned that “Learning to keep a secret” badge.

31st minute – So far everything is like a big chess game moving and procrastinating around until someone makes a move. But we all know the big stoush is coming.

40th minute – Frodo has been in and out of consciousness and dragged out of danger so many times that he should meet Lindsay Lohan so they can share stories of the various times they can’t remember.

44th minute – At last, metal on metal, orc chestplate to human torse. We’re going at it!

51st minute – You’d think if you had the choice prior to the battle, you would pick the side with the flying dragons and massive multi-tusked elephants. (After careful review of the credits I saw no dragon-trainer credit. They can’t be that easy to pilot, surely there was some monitoring or assistance?)

58th minute – A family moment. Not only does Faramir suggest to his old man that he would rather he die than his brother, but the Dad agrees! There’s an awkward Father’s day chat for next year.

66th minute – The hobbit song. Could have been worse I guess, but it still wasn’t good. At least it wasn’t as corny or out of place as the song in The Punisher, that was just stupid!

70th minute – A Legolas and Gimli sighting, they’re window dressing only to this point. Wonder if they were paid the same for all instalments? Betcha Orlando wishes he were dating Miranda Kerr back then when he had so much spare time on his hands!

88th minute – The Orcs catapult severed heads onto Minis Tirath, now that would seem to me to be a pretty good psychological technique, if perhaps against the Geneva convention. This is followed by a BIG-ASS CATAPULT fight.

95th minute – It was an 8 hour wait before we got to the giant spider. I would argue that it was worth it.

104th minute – Super-Mega Orc Ogre Trolls! My big gripe about Peter Jackson’s King Kong (TM) was that he introduced monsters and grooblies, made a big deal out of how dangerous they were,  then after their scene you never saw them again.

But never “Oh gee, not those insects again”, they were seen, warded off, evaded or killed, then never seen again.

Similarly, it seems odd that if the orcs has Super-Mega Orc Ogre Trolls at their disposal, why wouldn’t they drag them out earlier?

106th minute – Sam tells the spider “Let him go you filth!”, the hobbit equivalent to Ripley saying “Get away from her you BITCH!”

113th minute – Probably the coolest fight except for the bit that starts in 7 minutes.

118th minute – The caretaker King goes up in flames. Cancel that embarrassing Father’s Day chat with Farimir, he will be pleased.

120th minute – When you have something chugging along at 9.5 / 10 and you need a lift, just add massive attack elephants. Never fails.

This fight was happily going on its way when I realised just how hard it would be even as an extra having Peter Jackson yelling out instructions:

“Now imagine a troll is about to hit you with a hammer. How big? Let’s says he’s 9 ft tall.”

“OK now a piece of castle flung by a catapult lands near you and squashes flat 5 of your buddies. No I know you can’t see it, just act like it has happened.”

“No an eight tusked elephant carrying various archers is moving towards you. You’re scared, you’re scared, now you’re hit by an arrow….. and dead.”

And throughout all of that as an actor you would see nothing!

121st minute – “Aim for the head to kill the elephants”, good to know that giant elephants are brought down in the same way as zombies. Handy to know that.

126th minute – “I am no man!” Aside from the stupid trees this was the low point in the trilogy to me, I don’t know if this was supposed to be some girl power thing but it was just dumb.

Quick question – Frodo and Sam were bailed out by the giant eagles, where were they at the start? Even if you had to wait a couple days for your cheque at the Giant Eagle Hire place to clear it would have been worth it. Jump on Giant Eagle, flap a bit, drop ring, go home to eat some yummy Lambas Bread (TM) “Now 42% more Lambas-ey!”

170th minute – Aragorn to the hobbits: “My friends, you bow to no-one.” Chills. OK like Star Wars this is an unnecessary but earned scene that officially wraps proceeds up, even though they were wrapped already.

Bear with us, nearly there….

Hang on, we know you were hanging out to see where Sam ended up….

Credits. Thank the right royal Peter Jackson! We got there.

So that about wraps up 9 hours of my life spread out over a few months, that I will no doubt revisit every couple years from here on in. Not many things better than a good story well told, it’s a genuine knock that there are just too many endings, even when you might argue they all deserved an epilogue, but the first 2 and a half hours are top notch and stand alongside The Two Towers.

I guess there is nothing left to do but wait for Tolkien to churn out another sequel.

Final Rating – 9.0 / 10. I think Jackson felt like he earned a three hour finale given that the first two were that long, but this would have been better at 2 hours and change. Still, an awesome ending (s).