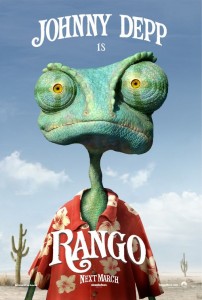 Rango is not a real name, only a pseudonym. A pseudonym chosen in haste by a chameleon stranded far from home and under pressure.

But as he has selected the name that is what I will use. Rango is a small, skinny, goggle-eyed chameleon with a large angular head perched upon a crooked and frail looking neck. He is articulate yet clueless, self confident but unsure at the same time.

Suffice to say that his quick tongue tends to get him into more trouble than it extracts him from.

The story proper starts when Rango – though at this stage still a nameless house-lizard – is thrown from his safe but bland pet tank in the family car. Stranded and initially alone Rango takes advice from a near roadkill and heads off into the harsh and inhospitable desert. It is there that he finds himself in a small Western style town. The town of Dirt. Where water is so rare that it has become a currency, albeit an ever increasingly rare one,

After some dealings with the locals and a run in with a hawk, Rango finds instant credibility with a town in need of a hero after he ad-libs his way through the tale of how he killed the Jenkins boys with a single bullet.

All seven of them…

In recognition of this newfound renown an elderly turtle – ahem – ‘the Mayor’, dubs Rango Sherriff and gives him the task of guarding the town’s ever diminishing water supply.

Then the water goes missing…

Rango was… unexpected. I didn’t actually even plan to check it out but got roped along when Battle:Los Angeles was packed. The film was extremely entertaining and funnier than any animated film I can think of off hand. Johnny Depp absolutely slays as the titular reptile, with a scattergun delivery and a voice that is part Hunter S Thompson, part Willie Wonka (there is even a Hunter S Thompson nod in the early going).

I found myself chuckling along at non-jokes simply because of his ridiculous intensity and the alternating cocksure boasting and increasing desperation as he realises he is a lizard out of his depth. But don’t worry, padding out the non-jokes are several real ones, a few cracked me up and thankfully they weren’t painstakingly built and obviously looming. 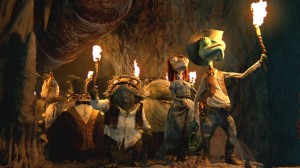 The animation is incredible. Each critter (and there are a great many) is rendered beautifully – even the incredibly ugly ones – and feature amazing detail. Funnily enough the most ‘cartoony’ is perhaps Rango himself, though his buggy eyes tend to tell a story all of their own.

It mattered little to me but this is definitely not the flick to park the kids in front of for an hour. There are numerous nods and winks to adults, which I recognise Pixar does too, but these are distinctly more ‘adult’. The afore-mentioned Hunter S Thompson cameo, a pretty graphic vision of the near-roadkill and several other moments that depending on viewer age might be considered scary or gross. Let’s just say I know of a 4 year old and a 6 year old that I wouldn’t accompany to the theatre for a viewing. (Maybe 8ish might be OK? But I’m guessing.)

Again I didn’t see Rango coming. It was a surprising blend of fresh and different comedy in unexpected surroundings, capped off by a superlative voice job by Depp and quality work from a cavalcade of stars including Isla Fisher, Bill Nighy, Alfred Molina, Ray Winstone and even Timothy Olyphant pulling off a very worthy Clint Eastwood impression. This is all only enhanced still by some of the best animation and character design that I have ever seen. It will require a second viewing before I would be willing to elevate Rango to ‘Great’ status, but at this point I am happy enough to state that this is the best film so far this year. (Alright Winter’s Bone was better but it sure wasn’t this much fun.)

Final Rating – 8 / 10. This tale of a colour-changing lizard’s journey to find himself and save a small town isn’t as kiddie as it might sound. The best non-Pixar animated film so for many years.