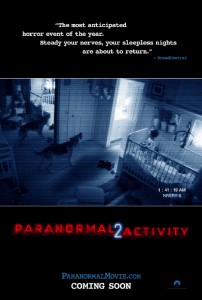 Second verse, same as the first.

So I bought tickets to Red (and was pleasantly surprised as you might read HERE).

Not that I have anything about vacuous teens ruining my movie *he lied*, but in a film that was obviously going to be about long silent build ups and “BOO” reveals having a bunch of chuckleheads talking and braying through those moments seemed counter intuitive.

Now a few weeks later the queues filled with slack jawed yokels are in front of Saw 42 (or whatever they are up to now), so I snuck in to a third filled theatre and caught Paranormal Activity 2…

And I realized that three weeks ago I could have stayed home and rented the original and seen the same film… EXACTLY THE SAME FILM!

PA 2 takes place in the weeks prior to PA 1, but it isn’t really a prequel as it is a companion piece to the first – I can’t explain why without spoilers – you’ll see.

Dad and Mum bring home baby Hunter. The early going fast forwards us through his babyhood in handheld home video style to that day until he seems about 2. Hunter can crawl and walk a little, never seems to talk though.

Dad might be 45ish and Mum 35ish, their home hosts stepsister to Hunter Ellie (Dad’s daughter) who seems about 16, and Mexican (Latin anyway?) housekeeper Marline and a German Shepherd dog named Abby. Mum has sister Katie and possibly one-day-will-be Bro-in-law Micah (from PA 1) popping in every now and then for barbecues, drinks and eerily portentous conversations…

We are even informed of Micah’s “Deathclock” early in the piece, not sure exactly why they thought that would be handy but there you go.

After a night out the family arrives home to find the house absolutely trashed, but nothing is missing. They decide that they would like to see any future trashings – but not prevent them – so they install a bunch of pinhole cameras but seemingly no alarms, as much of what follows would undoubtedly trigger them if they had.

We spend the next hour watching the corners and background for movement, straining our ears to hear stuff, wondering why that happened or what might have caused that noise or bump.

The family ponder how the Kreepy Krawly keeps “escaping” the pool each night (a cool reveal, but I fail to see how it was part of some demon’s master plan to have a the pool cleaning device end up on the bricks nightly), why the frying pans fall down randomly and how doors close by their own volition.

Marline of course isn’t a native to America – therefore we understand immediately that as someone with English as a second language she is genetically predisposed to sussing out evil way before us English speakers. She performs a little bit of a spirit cleansing involving little more than some incense and muttered chanting… and is sacked for it.

The occupants of the home argue over the seriousness of the events around them, a séance is performed, they review the tapes of previous days for offputting proof that shows but doesn’t tell, and they wonder openly why the dog keeps barking and why the baby won’t look them in the eye… (I have the answer to the last two: because it is a dog and because it is a baby.)

I can’t say much else for fear of ruining both films, but I would reiterate my point that if you’ve seen one you’ve seen both.

This year I watched The Descent 2, itself a transparently obvious remake of the first, I gave that a generous 7.5 / 10, which I still feel was fair and a full 2 points below the score the original earned. In the case of PA 2 I can’t be that generous for reasons I can’t disclose (but will if someone asks), sure in remaking the solid first film they are being a little lazy, obviously maximizing the box-office by replicating what worked 12 months ago – but if you really think about how the two plots dovetail into each other I find myself a lot less forgiving… 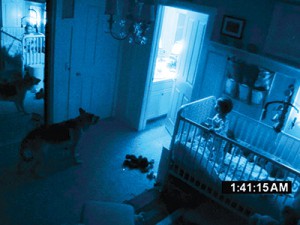 By the way, the trailer with all the red herrings and “did I just see what I thought I did?” moments was way cooler than the film itself, watch that 40 times in a row instead.

Final Rating – 6 / 10. Steals liberally from the first unexpected box office smash – a little too much as it turns out. In isolation though an effective replica I guess.