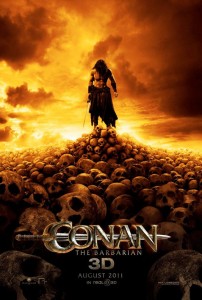 It was just a small mountain, but a smelly one,

Unlike many other thirty-somethings I wasn’t that enamoured by the Conan franchise in the 80s. I mean I saw them all and only a few years later was converted to a full Arnie-Fan with Predator, Commando and The Terminator, but his leather loin-cloth and gleaming weapon never did that much for me.

So saying I looked at the reboot with some trepidation is a bit of an understatement. Well here is the almost apologetic square up: Now that I have seen Conan 2011 I wish I caught it in its (extremely limited) cinema run.

Forget Centurion and The Eagle (though The Eagle is perhaps a better film), THIS is what big screen dumb bare-chested action is all about. Put another way; anyone who enjoyed the Arnie originals – or anyone who spends too much time staring at heavy metal album covers – will find much to enjoy here.

Conan was born in the same place he lived – on a battlefield – in a hasty poor man’s caesarean amid a huge ongoing bloodbath. As he aged and matured Conan was similarly premature in his battle readiness, beheading his first four savage assailants and proudly displaying them to his proud chieftain Father (Ron Perlman) before his barbarian-balls dropped.

Then on the same day Conan’s life changed. Jay Leno announced he wanted his old gig back and… wait, wrong Conan.

On his fateful day Conan’s Father died, and the final piece of an ancient mask with supernatural powers was gathered by a vicious murderer named Khalar Zym (Stephen Land), a man with a rapidly growing army of heavily armed followers and aspirations of global domination.  With the mask in hand all Khalar Zym needed to fulfil his prophecy was the blood of a ‘pure woman’, and he, his army and his young witch daughter Marique (Rose McGowan) set off to search for it.

But Khalar Zym didn’t tie up one very important loose end. He left young Coney alive to swear vengeance with his final words before his mighty voice broke…

What follows is everything you expect from a film with Barbarian in the title. And more. Conan 2011 is violent, blood-soaked and action packed on a suitably large scale, with tough mono-syllabic talk, furrowed brows and heaving bosoms of all kinds.

Along the journey Conan must face a myriad of faceless minions, fanciful monsters and magical creations, all seemingly desperate to leap athletically upon his huge sword. Speaking of huge swords, Conan must also escort the damsel with the afore-mentioned pure blood, a young woman named Tamara (Rachel Nichols), with who Conan shares a 300 style sex scene that sets him apart as the most giving barbarian lover on record.

Jason Momoa does his best as he can as Conan in a role that practically demands that he be wooden and dumb, Stephen Lang is suitably villainous as Khalar Zym and benefits from being surrounded by a menacing menagerie of minions (Hey I love alliteration), and Rose McGowan chews the scenery as the evil witch who is quite possibly ‘Daddy’s little girl’ in a most inappropriate sense.

Final Rating – 7 / 10. I watch too many movies. I now look for reasons not to revisit films and subsequent sequels. I cannot extol Conan as one of the films of 2011 – far from it – but if they decide to make a sequel to this reboot I will watch it, this time at the cinema.