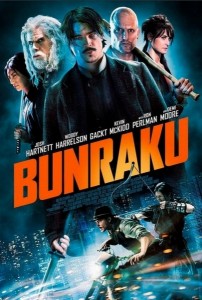 The poster is actually strangely apt for some reason. I don’t know why.

Apparently the post-apocalyptic future doesn’t always have to be all bad. In the new Sin City after an acid hit clone Bunraku things look quite stylish and colourful indeed. Atop these aesthetically pleasing visuals are the fact that guns of any kind are banned, meaning a return to the days of fists, swords and sticks to do one’s dirty work.

In the city in which Bunraku takes place a grizzled old man named Nicola the Woodcutter (Ron Perlman) runs shit, having himself proven himself King of this particular mountain he sits lonely atop waiting for new contenders to usurp his throne, with his muse Alexandra (Demi Moore) alongside, and a team of nine assassins protecting him from harm, not the least of which is Killer #2 (Kevin McKidd), who proves more than once that he is an exceptionally well credentialed bodyguard.

Then one day two lone figures amble into town, both finding solace in the local bar run by The Bartender (Woody Harrelson) – this is a film where names are at a premium. The two men are The Drifter (Josh Hartnett) and the somewhat androgynous Yoshi (Gackt).

Both men are in town for a reason. Both men want to know the location of the Woodcutter, and after a scuffle in Woody’s bar they reluctantly agree to unite forces and pursue their target together, with the Bartender in tow.

That’s the set up, but the film is essentially a long series of overdone fights so immaculately and carefully choreographed as to remove all sense of urgency or excitement from proceedings.

The film is a never ending swirl of colour and movement, and the prevailing sense is that the filmmakers decided to throw absolutely everything at the wall to see what would stick. The visuals are often brilliant and unfortunately show up the action in front of them, the sets are creative and ornate, the subtitles are comic book style, even Mike Patton as the narrator sounds like he should be doing the voiceover for a whiskey commercial.

In one sequence a fight in a many storied building unfolds side scrolling video game style – I voted for Elevator Action – complete with accompanying blip and bloop sound effects, and the rest of the fights are so precise that they resemble dance numbers.

But intricately constructed pretty fights get boring real quick without a semblance of plot or justification. Things might have fared better if there was some humour or characterization to liven proceedings, but Gackt proves that he can fight, but English is very much his second language, Woody plays it fairly straight, and Josh Hartnett obviously is more at home in a noir setting, such that he constantly squints his eyes as if to better ignore the bright surroundings. But as we know all noir and no energy makes Josh a dull boy – and he is that here.

Only Kevin McKidd as Killer #2 provides any real spark, even when not kicking several kinds of technicolour arse he remains a whirlwind of energy and effectively steals every scene in which he appears.

Bunraku is unlike any film I have seen in quite a while, in fact it is far more reminiscent of a video game, even in the non-Elevator Action scenes. For me it was so striking and ambitious that I effectively granted it a 6.5 after only the first 5 minutes – daring it to prove itself worthy of a higher score. But alas the bland plot, repetitive action and lackluster performances never justified the elevation.