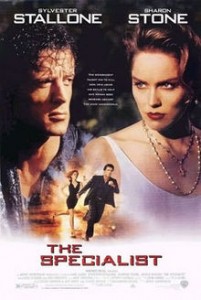 Specialising in crap action since 1994.

Perhaps by the mid 90s Stallone was a little concerned with being typecast as ‘the slightly dopey sounding muscle-head who shoots people really dead’. So with The Specialist he takes a dramatic career turn, here ‘he blows people up really dead’.

Aside from that amazing departure from the action norm it is entirely business as usual. Sly is the quiet, heroic good guy, James Woods is the loud and obnoxious bad guy (who as a bonus has a long held grudge against Sly), and Sharon Stone is the eye-candy in distress, with the added action bonus of deciding to wander her home in various states of undress.

But how is the action? Well the opening 6 minutes sees a huge explosion set off near a car full of people, with Sly actually being closer to the blast and not having the benefit of being in a large metal object.

Sly? Jumps away. (Or should I say ‘Not Sly’, it’s an obvious stunt guy). Not a scratch on him.

Maybe the passengers in the vehicle should’ve ‘jumped away’; or been more famous and on the poster…

Being a film with an explosives expert there are dozens of carefully placed and designed explosions, all purpose built to do certain things to certain people. This was all probably intricately researched and painstakingly organised to appear cool on screen. The reality is though that in a film with a bunch of people trying to kill other people it is simply unnecessarily convoluted, like trying to fill a bucket with a hose but insisting on using a funnel.

Guns go bang, and are a hell of a lot easier to set up. Handing someone a cigarette packet set to blow might be momentarily cool, but I can assure you a bullet between the eyes would have the same end result, with a fraction of the time to set up.

Anyway in the film May (Stone) has a vendetta against a local high rolling scumbag played by Eric Roberts. She wants Demolition Man Ray (Sly) – an explosives guru – to help top him. When Ray says no thanks – or more realistically something indecipherable and grunty – May decides to quite literally put her body on the line to get near her target.

Despite declining the job it seems that Ray has either an active interest in seeing May get her revenge, or he is simply stalking her and hoping she keeps answering the phone in her undies while he watches through the open window. (I can’t really blame him if it was the latter, this was the mid 90s before all the famed Sharon Stone chassis succumbed to gravity and the weight of her own pretension. )

So Ray watches on while May stalks her prey – again a gun would end things quickly at this point given her proximity to the scumbag, she is sharing a bed with him after all – but the rhyming pair don’t even meet until at least half way through the film, at which time they immediately get to a lengthy scene of slappin’ happies which to be brutally frank is more strange than it is titillating.

The Specialist is more a 90s curio than a forgotten gem, it seems that they booked the actors and got them to agree to a sex scene, then cobbled together a derivative action script. The end result is unfocussed and almost unfinished, and the film is riddled with continuity errors such as when May throws a punch while wearing sunglasses, then turns back to camera without them.

I’m sure that at one point the studio must have had high hopes for The Specialist, an action film with action hero Sly Stallone, a ‘still hot from Basic Instinct‘ Sharon Stone, and street cred in the form of an over-acting James Woods. Unfortunately the end result is – excuse the pun – overblown yet somehow un-explosive.

Final Rating – 5 / 10. A big budget, big name, big time disappointment. Not even the hotel room falling into the ocean (!) could inspire me to recommend this blandness.

While I try to throw a joke or two into proceedings when I can all of the opinions presented in my reviews are genuine. I don't expect that all will agree with my thoughts at all times nor would it be any fun if you did, so don't be shy in telling me where you think I went wrong... and hopefully if you think I got it right for once. Don't be shy, half the fun is in the conversation after the movie.
View all posts by OGR →
This entry was posted in Crappy Movies, Film, Movie Reviews, Sly Stallone. Bookmark the permalink.