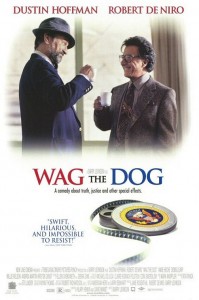 I couldn’t be less interested in politics generally. In recent years more and more politicians are being shown up as unbelievably corrupt, both financially and morally, and that leads me to doubt almost averything that most of them say anyway.

Incredibly this was released the year before Monica and Bill played hide the cigar, Wag the Dog concerns the efforts of White House staff to conceal an “indiscretion” made by the incumbent Preseident in the weeks before the Presidential election. Robert De Niro plays the White House equivalent of Mr Wolf from Pulp Fiction Conrad Brean. His role is to bluff the media for just long enough to get past the election, where the President (never seen in the film) had a massive lead in the polls at least before the incident.

De Niro and his team never pretend the President didn’t commit the act, only that they must cover it up, so Brean decides that the public will only be sufficiently be distracted by a misdemeanour this large by an even larger situation. So Brean and his team consult with a Hollywood producer, Stanley Motss (Dustin Hoffman) to see that they get one. They do this by spreading rumours through various sources that the US security has been threatened by another country, in this case Albania, and that America must band together to ward off this enemy.

This comes as a surprise to Albania of course as no such peril exists, but I guess that for a film such as this an element of farce is required.

Wag the Dog is never especially funny, there are a few chuckles to be had but the main pleasure is derived from some fairly smart dialogue and how the large team that is ultimately amassed deals with inconvenience and developments that aren’t in their favour. Of course being a movie nothing runs smoothly, the CIA and the opposition party see to that, but it is how Motss and Brean adapt and react that provides the interest.

Motss is initially reluctant to help, given that he won’t get any public credit regardless of how the ploy works, but as things develop his relentless positivity is pretty amusing, it doesn’t matter how bad things look, he is still there saying “This is nothing!” and coming up with yet another counter-move.

De Niro plays the straight man for much of the film to Hoffman’s egotistical Hollywood bigwig, but you sense he is not a man to be messed with and will do anything to make sure that his side wins.

As the credits were initially rolling my wife said something along the lines of “Wow, everyone is in this”, and indeed the cast does boast Kirstin Dunst, Denis Leary, William H Macy and Woody Harrelson, as well as Anne Heche as Brean’s loyal yet seemingly a little naive aide.

The final third of the film contains some plot points that seem a little bit too extreme even for a satire such as this, especially given the intricate planning and attention to detail given to early situations, but overall what I went away thinking was “well that seemed way over the top, but no more than the Lewinsky scandal”, and in my mind that is probaly the most scary part.

Stuff like this probably goes on in America way more than we realise, and that we as the global public probably believe way more of what we are told than we should at times.

Final Rating – 6.5 / 10. OK as a film, this is more a necessary reminder to us all not to believe everything that we hear in the media. (Though while we live in a society that believes that the Osbornes, the Kardashians and Paris Hilton really live like they do on TV this seems a pointless reminder.)