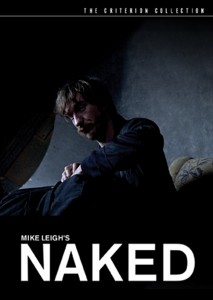 After Naked finishes you might find yourself feeling unclean, rolling around in the mud couldn’t make it any worse. You might too be depressed, perhaps googling ‘drowning puppies’ might lift your spirits a little.

This is not me saying mud baths are miraculously restorative or animal cruelty is fun, more a suggestion that Naked is indeed some mind numbing dark fare.

After an ambiguous beginning we meet Johnny (David Thewlis), a ratty stringy haired and bearded beanpole with his dirty clothes hanging off his skinny frame and a cigarette perpetually in his crooked fingers.

From first line to last – and he has a great, great many lines – Johnny is abrasive, verbose and condescending. He is a smart arse cracking quick jokes and quips that range from witty to puerile, but all are issued with the intent of denigrating and putting down. 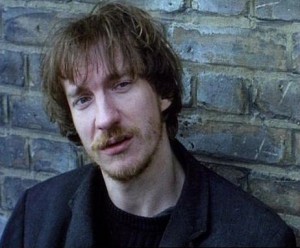 Johnny is a wanker. I can’t stress that enough. He doesn’t care if you agree with him, in fact he seems happier if you don’t like him.

He is also obviously whip smart as well as opinionated and brusque. In a series of meetings, some chance and some selected Johnny treats those he meets more as transactions, there purely for his own amusement and distraction to be toyed with and discarded when he loses interest.

He roams the streets meeting the sad and vulnerable crushing dreams and twisting the circumstances to his own advantage with a personal magnetism to the very people he openly derides that is inexplicable.

The poor and disenfranchised seem to opt for conversation over loneliness even as Johnny continues to make them second guess there own existence, if sex is available he takes it and he is even more abusive if someone dare take offense to his persistent verbal attacks.

Like a chimp swinging through the jungle he never releases his grip from a vine until it serves no more use or until another one is within reach.

Along the journey Johnny visits Louise with whom he shares a past and the two are instantly dismissive and acidic towards each other. Louise bunks with Sophie, a pathetic and eminently needy stringy waif who immediately feels Johnny is her soulmate. Sophie is an emotional mess in a world that otherwise seems largely devoid of passion or feeling – anything positive anyway.

Other chance meetings include a young skivish couple searching for each other through the dingy backstreets, Brian the lonely middle aged security guard desperate for someone to talk to and a random woman that Johnny toys with mercilessly until he practically breaks her already fragile spirit.

Naked doesn’t really teach you anything aside from the opportunistic nature of some people who take what they can get, and perhaps it doesn’t matter how low you feel there is always someone out there to take advantage of you and make you feel worse.

I can’t deny that Naked is very effective in involving the viewer in proceedings, there was rarely a meeting that didn’t have an impact one way or the other. The only misstep was the inclusion of a more privileged and handsome Jeremy, a similarly seedy user of people though with perhaps even more reprehensible intent. It just felt like overkill while Johnny was doing his dastardly thang all through the film to include such a similar lech in the film, especially when they both end up in the same home at the same time by coincidence. Were it not for him I might’ve tipped the score up a little more.

As it is even with the solid score below I find it hard to heartily recommend such anti-enjoyment fare, so I’ll use a dual rating system for the first time just for this film.

Enjoyment Factor – 3 / 10. A dirty little film that will cause you to question the merits of the human race remaining in charge. Hide the razors before watching.