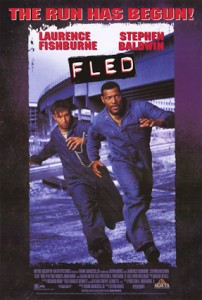 “Are we out of this movie yet?”

I love Laurence Fishburne, have been a fan since way before Morpheus became the second most famous bald black guy since Michael Jordan and count Jimmy Jump from King of New York as one of the more memorable bit characters in film.

I luuuuurrrrrve Salma Hayek, but for entirely different reasons.

*Thinking about the reasons…*

The fact is she hasn’t made a decent film in well over a decade and those were memorable seem to have the same recurring theme:

From Dusk Till Dawn: A dance that is forever ingrained into my memory

Fled finds Laurence Fishburne and Salma Hayek in an action film with occasional romantic undertones and a distinctive ‘urban’ feel (read: rap music soundtrack and sporadic “Yo Mama” dialogue). So why is Fled one of the hands down worst films I have seen in ages?

So many reasons actually. The primary one reminds me of the famous phrase “A thousand monkeys with a thousand typewriters will eventually bash out something nigh Shakespearean”. Well let’s consider the script of Fled as one of the poor overworked monkeys earlier drafts…

Put another way, it must be extremely hard to write a script with dialogue that is witty, clever and serves both characters and plot, but I would venture it would be harder to write something as inane and vacuous as the stuff in this steaming pile. I’d rather read episode transcripts of Jersey Shore than sit through this film again.

Stephen Baldwin’s character of Dodge has a recurring motif where he mentions the plots of other – better – films that was awful the first time, yet they kept coming back to it again and again. Fishburne gets not a single line of dialogue worthy of his booming voice where he gets Louder As The SENTENCE NEARS THE END! And Salma might have been better served staying in Mexico for a year or two rather than wasting some of her formative acting years in this drivel.

The only thing worse than the dialogue is the plot.

Some ludicrous developments find Piper (Fishburne) and Dodge chained together and on the run from the law and other nefarious forces, including a Cuban assassin with a seemingly endless supply of expendable minions.

The duo don’t initially get along, and in true moronic action movie style lay into each other like heavy bags and throw each other around like rag dolls, while never getting a scratch on their faces.

The plot is full on eye-rolling ‘oh dear’ moments that culminate with Salma as the least serious or concerned hostage in history, and Fishburne repeatedly playing a harmonica without his cheeks moving.

As things progress is becomes all the more lamentable and website be damned I felt impelled to reach for the Stop button more than a few times after about 15 minutes in.

It turns out that Dodge is a hacker, with a computer disk containing sensitive information that is important to some who would find him dead. Piper too is not all that he seems, and the mismatched duo (in that one is a well respected quality actor with a reputation in film to protect. And the other is Stephen Baldwin.) set about getting  to the bottom of an increasingly convoluted series of inexplicable coincidences and plain old god-awful scenes.

The usual suspects are here; the good honest cop who is all smarts and integrity, the bad cop who would do them harm, plenty of other moron cops to neither understand the good cop nor realise the bad cop is actually bad. A stripper with a heart of gold – and tits of silicon – and the afore-mentioned Cuban assassin.

Whichever chimp came up with the plot should be subjected to animal testing, and obviously skipped the kindy-class on effective foreshadowing, which lead to me saying out loud in my empty living room “Oh if he doesn’t get on that bike within the next minute and a half!”. He of course was left with no alternative…

The one positive I can say about Fled was that it inspired me to develop the concept of ‘acting demerits’ where all actors are given a license with a certain number of points, and lousy performances count against them, leading to suspensions, fines and disqualifications.

Fled is the cinematic equivalent to causing a massive pileup entirely through your own negligence and stupidity. In this case though it is we the audience who are the innocent victims.