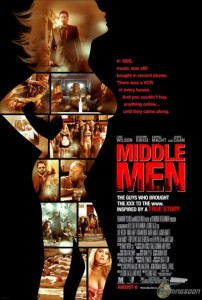 Willem eventually saw the sailboat was actually a nude girl...

But even though the pair Wayne (Giovanni Ribisi) and Buck (Gabriel Macht) are perhaps smart enough to come up with this one Eureka! moment they are not very business savvy and are equally inept at selecting the most appropriate business partners, which explains why shortly after coming up with the idea they find themselves inextricably linked with the Russian Mob.

In truth the early goings on of the film – not just the inept buddies – is all over the shop. With quick cuts, flash forwards and flashbacks it is extremely hard to keep track.

Enter Jack Harris (Luke Wilson). Jack is a cool, calm and collected master of logic, skilled at negotiation and blessed with business acumen. He is also a family man with three kids and a pleasant wife who initially wants zero part in helping two dumb shits make their porn-related venture more profitable…

Until his logic once again kicks in and Jack realises just how much money there is to be made, he figures he’ll stick around for a few years, get rich and retire to the lap of luxury with his family and morals intact.

Wayne and Buck are high school buddies and initially are in deep enough trouble that they welcome Jack’s assistance. Jack comes up with a plan to remove all extraneous and potentially dangerous personnel, reducing the number of paws reaching for profit.

This means buying out the man who facilitated Jack’s involvement, a seedy lawyer named Jerry Haggerty (James Caan), and the Russian Mob themselves. All sounds pretty nifty in theory.

Unfortunately this is where I think the ‘inspired by’ kicks in. The payoff with the Russian mob goes desperately awry, dragging Jack further and deeper into the biz than he ever planned. 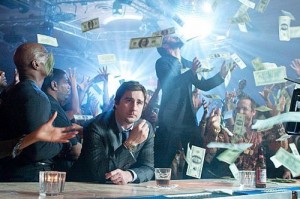 We call this 'Wednesday'.

As they must in film further complications arise when Jack’s wife twigs to his involvement, a young up and coming (pardon the pun) starlet moves into his radar and the FBI start scrutinising the business affairs. (There are even terrorists!) All the while Jack holds onto his own terrible secret and the Russians and the lawyer Jerry Haggerty work out how they can move in and get their own cut of the profits.

Middle Men was made in 2009 and the red-band trailer I referred to came out early last year. For some reason they shelved the film for a while, no idea why but perhaps it was because they realised that it just isn’t that good.

Oh and as far as the concept of Luke Wilson as a master negotiating business tactician? Not so much…

Final Rating – 6 / 10. Before anyone questions my hetero-ness I might point out that apparently the internet still has the capability of sourcing near-nude photos and video of real women, I just wouldn’t have to sit through a boring two hour film to get to them.