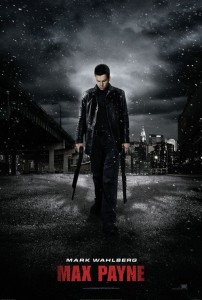 “I’m sad and these guns are really heavy!”

Max Payne has a few things going for it, tone, some creative and frankly striking visuals, Mark Wahlberg channeling his inner Bruce Willis… but not enough to elevate it to anything more than a ‘decent’ video game adaptation. This leaves it with Hitman and Resident Evil, and perhaps a notch below Silent Hill, but still not very good.

Max is a jaded cop on the shelf. Deemed unfit for active duty after his wife and baby are killed, Max shuffles papers and files files in the cold case department of the force, his colleagues told not to poke the bear.

But by night Max is quite a deal more active, roaming the seedy underbelly of the crime infested city on the hunt for his families’ killers, taking out his frustrations on junkies and low lives – all hooked on the new superdrug ‘Valkyr’, which apparently gives users its users wings in a far more literal sense than Red Bull can ever claim, in the form of incredibly vivid hallucinations that are practically interactive.

With Max edging ever closer to the truth, others provide assistance along the way, his former partner, a junkie woman’s sister Mona Sax (Mila Kunis) and a family friend named simply ‘BB’ (Beau Bridges). Unfortunately when both his former partner and Mona’s sister are offed in rapid succession – with Max being implicated in both cases – he falls on the radar of internal affairs cop Jim Rivera (Ludacris), and eventually the greater police population also. 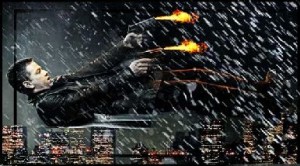 Don’t think the game can even pull this move off.

I think we’re supposed to think that the superdrug is just so cool and the fact that the movie liberally sprinkles video game features such as bullet time and a couple of shooter-style sequences is supposed to wow us. The problem is that Max Payne is such a dispassionate and uninspired character – in the literal sense, I’m not suggesting the character is bad.

That’s OK and totally understandable if you’re a grieving husband and father, not though if you are supposed to be an action movie.

Add to this two point-docking sins:
1/ Max Payne is a PG version of a well liked violent video game. The ‘Unrated’ version has three or four kill shots with a bit of blood, but no more real oomph. Making a PG version for an audience familiar with a violent video game is simply a waste of time, and a trap that catches all too many filmmakers lately. I simply put it’s no wonder there hasn’t yet been a shooting game adaptation that demands attention.

2/ No-one told Beau Bridges that it was a film about a video game – not a cartoon. He is simply wrong as BB, and his lamentably cartoonish performance straight up sucks, especially his early scenes where he acts like there’s a laugh track playing behind every line he utters.

And you have yet another promising film that tries but fails.

Final Rating – 6 / 10. Technical proficiency and well loved source material gets you so far, half way to a decent film in fact. But who wants half a decent film?