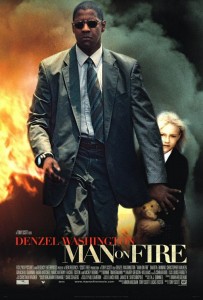 Another triumph for photoshop.

At the opening of this film we are told that kidnapping for ransom in much of South America is less a crime than an occupation for some. A business transaction if you will. We are also told that many of those taken are not returned successfully…

Gee what an odd stat to open a film with! Wonder what this is about?

Denzel plays a burnt out special ops soldier name John Creasy, visiting Mexico city to catch up with ex-colleague played by Christopher Walken who, seeing Creasy purposeless and apathetic hooks him up with a job as bodyguard for the daughter of a well to do businessman named Samuel (J-Lo’s missus) and his wife Lisa (Rahda Mitchell).

The girl’s name is Peta (Dakota Fanning), she is about 8, bright, friendly, a little precocious and a lot inquisitive. Initially Creasy doesn’t care, he tells Peta that his job doesn’t extend to being buddies or caring, as long as she is alive he can punch in and punch out a contended man.

Creasy spends the days protectin’ and the nights drinkin’ and contemplatin’… after one such comtemplatin’ leads to a botched incident though Creasy decides to see the scotch glass as empty – as in from now on. He and Peta start conversatin’ with Creasy enjoyin’ a new lease on life. They start to bond over her swimming training and after much practise after the ‘big race’ they have a firm relationship in place.

So we know exactly where this is going don’t we? The event is inevitable and bloody. Both ‘sides’ take hits, to the bad guys (including cops) there are 4 down, to the good guys – namely Creasy – he is left for dead in a pool of his own blood and awakens days later from life support to be told that Peta is dead. A victim of a failed ransom handover that turned into a shootout.

Furthermore he receives the good news that as the ‘America’ he is initially somehow to blame for all of this.

Well Creasy ain’t havin’ it. Without waiting around for the proper rehabilitation he heads out; not to solve the case but ‘kill anyone there, anyone associated or anyone who profited’ from the abduction of Peta. He receives Lisa’s full endorsement, asks Walken for help and is offered assistance from a female reporter tired of the injustices who feels that a rogue Creasy will achieve more than the cops who are all either corrupt or focussed on ‘live’ cases.

Man on Fire is actually far more violent and aggressive than 90% of Denzel movies, as he uncovers the truth and traces the leads back to those who ordered the kidnapping Creasy leaves a trail of tortured, bloodied bodies in his wake. He doesn’t mince words or waste time moralising, if you fit the criteria as being marked for death then death is what you shall have… and you ain’t gonna like it when it arrives (ummmmm, ass-bomb?).

I should also mention some of the more effective use of subtitles this side of the Crank films (for different reasons I guess), in Man on Fire the subtitles become part of the film, making them easier to read and interpret (I mean from an urgency and intensity standpoint, not language.)

As always Tony Scott proves he is a better director than given credit for, especially for ‘movies’ instead of ‘films’. His ‘movies’ are action packed and always geared more towards the entertaining than the preaching, teaching or seeking critical acclaim. His recent runaway train flick Unstoppable was way more entertaining than it had a right to be and Déjà vu is a totally underrated and too frequently ignored gem.

It is all too easy to complain about a director getting things wrong and then clumsily inserting your own ‘if only he did this…’ stuff, but with Scott it is quite often the case that revisiting the film in retrospect shows that he got it all right. He seldom aims for the stars with his flicks but always seems to make the best of what he has available to him, thankfully that often means Mr Denzel Washington, one of the most reliable men in Hollywood.

In saying that if I had a diss at Man on Fire it is too long at 140 minutes. But rather than just being a question man I will also be an answer man: the swimming training sequences could have easily lost 10-15, the casing the bad guys another 15. This film loses 20 odd minutes and it is instantly a lean, mean 8 / 10. As it stands it remains a slightly bloated, violent revenge flick that builds speed nearer the end.

Final Rating – 7.5 / 10. Not as good as Déjà vu and probably less entertaining than Unstoppable, but Man on Fire gives Tony Scott and Denzel Washington 3 for 3 in the ‘worthwhile’ stakes.