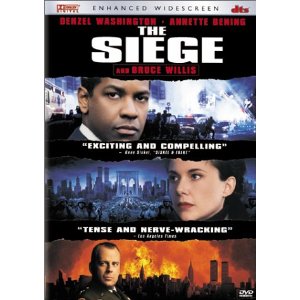 Look we all made the poster!

The Siege was released in 1998. It most likely was released on DVD sometime in 99 or at the latest 2000. It stars ever reliable Denzel Washington and one of my favourite actors Bruce Willis. I must’ve seen the DVD cover 127 times over the last decade.

I knew all the above facts very well, yet I never watched it until a couple days ago.
Why? Because, like Outbreak and many other films of the era, I knew the film back to front without watching it. I knew The Siege to be a terrorist themed film with obvious ethnic and socio-political issues that confronted obviously controversial topics in a brave way.

I repeat I thought that before I watched the film, and I was spot on. The Siege is everything I knew it was for a decade without the unneeded benefit of proof.
This is neither good nor bad, just the facts.

In five years time I will walk past a DVD shelf with The Siege on it and think ‘yep I’ve seen it, then without any specifics I will re-think the thoughts of the first paragraph.

In this case Denzel is FBI Agent Anthony Hubbard, his second in command is played by Tony Shalhoub, who for the purpose of this review (and the film) I might point out is of ‘middle eastern’ descent.

When a terrorist threat arrives in New York City (yes the film was unfortunately prescient) it is swiftly identified as being of middle Eastern descent. When a bus filled with people goes BOOM NYC goes into lockdown mode, with the threat of more attacks looming the terror threat level goes to… whatever colour we think middle Eastern people are while still remaining PC.

With everyone on tenterhooks and ethnic tensions simmering an expert on middle Eastern affairs from another government department steps into the fray. Her name is Alyse Kraft (Annette Bening), and she tentatively teams up with Hubbard and co, providing advice and occasional hints, without ever really seeming to ‘lock in’ to the task.

After a series of bombings the army is consulted, lead by General Bill (Bruce Willis), and the politicians run a merry dance trying to decide how to deal with this fiendish threat to the American view of freedom, and if armed intervention is necessary.

The Siege presses every button that you think it will and shows all sides of the story – from the American side of the story that is – that means people from the middle East are neither all good or all bad (except the ‘all bad’ ones), and *GASP* Americans can be pricks and racists too, I would never have thought!

The film was chugging along nicely in a mainstream formulaic way, without eliciting any extreme response from me, until the final 20 minutes got altogether preachy and ultimately verged into frankly ludicrous territory.

Final Rating – 6.5 / 10. In the end The Siege is hardly essential viewing, you won’t learn anything from it unless you have been living under a common sense rock for 15 years, it is merely a movie. A well made one, but no more than that.

While I try to throw a joke or two into proceedings when I can all of the opinions presented in my reviews are genuine. I don't expect that all will agree with my thoughts at all times nor would it be any fun if you did, so don't be shy in telling me where you think I went wrong... and hopefully if you think I got it right for once. Don't be shy, half the fun is in the conversation after the movie.
View all posts by OGR →
This entry was posted in Bruce Willis, Denzel, Film, Movie Reviews, The Grey Area. Bookmark the permalink.