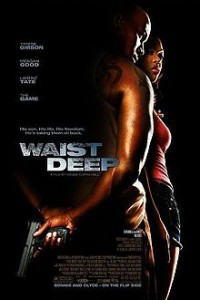 Silhouette shows all the good stuff: gun at the bottom, pink curve on the far right...

There are two basic sub-genres within the “urban” (read black guys) category:

1/ The totally play-to-cliche everyone rocks a glock & has dumb hair & shoots before they talk & hates the cops & keeps it real at all times & is part of a gang selling drugs & 110% gangsta 112% of the time.

2/ A more realistic portrayal, which if the depictions are right is all of the above only slightly less so.

Waist Deep straddles the line of the two and ends up being a bit of both, but as a result not much of anything.

Streets is hot in LA cuz. There are continual street demonstrations demanding that the violence be stopped, (though for some reason this never really comes into the storyline – so why have it?) and the mood is tetchy.

Otis is called away from his job to pick up son Otis Jr who is about 9 years old. On the way home his car is jacked with Otis Jr in it. (Might I add that Otis Sr has the nickname O2, wouldn’t it make more sense for his son to have that moniker?)

Moving on… O2 realises that the hot (seriously) chick who distracted him and thereby assisted in the jacking was in on the ground floor. He grabs her (never abet a car-jacking and expect to run away in high heels luv) and after the girl Coco realises he really loves his son the two set off top spend the rest of the movie finding him.

Within 12 minutes or so O2 finds out through his sketchy cousin Lucky that a gang called the Outlaws (ooooh scary) lead by crime-boss Big Meat (it pays to advertise I guess?) has O2-2 and wants O2 to pay a ransom to get him back. 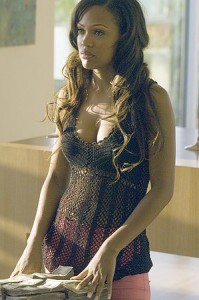 To raise the funds O2 and Coco – sounds like a bad Euro DJ team – must wreak a 2 person crime wave all over the city during which Coco gets to wear a cavalcade of fashionable outfits that were fortunately provided in an otherwise pointless scene where they go to an underground fashion dealer and stick ‘em up.

I’m not complaining much, Coco is hot.

The film continues the paint by numbers approach, there is a love scene, proof that Big Meat is tough, nasty and ruthless and also that O2 is basically a hard working father pushed into a situation against his will, yet eminently capable in this environment… and Coco is still hot and wears lots of outfits (not sure if I mentioned that before).

The title Waist Deep probably means something, I have no idea what. The film is far less macho and has fewer chest-puffed out scenes than the poster might suggest, it also isn’t anywhere near as over the top as I predicted. It’s merely another film where a Dad must save his child from the naughty guys while the clock is running… and neither a good nor an especially bad one.

Final Rating – 6 / 10. Referring back to the first statement in this review: there are 2 sub-genres available. Waist Deep chooses neither, which is the main reason that it is quite forgettable and not very entertaining.