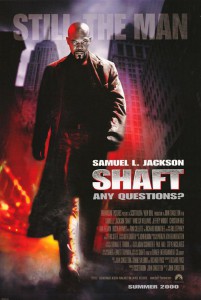 Who’s the black private dick that’s a sex machine to all the chicks? THIS GUY!!

Shaft was the man in the 70s. He rocked a bad-ass fro, carried a big gun and chose his funky words carefully. He also stuck it to the man and many ladies in equal proportion, but in differing methods…

Then he apparently took some time off.

Then in 2000, he came back, using one of the better reboot/remake rationales – the remake of the 70s low budget film. (If having access to CGI is your only reason to remake a good film, history has shown us don’t bother… unfortunately the box office hasn’t backed it up.)

Samuel L Jackson is the Shaft 2.0 (I assume that wouldn’t be an accurate measurement…), the original John Shaft is still working as a private eye and catches up with Sam occasionally, but new Shaft works in his own way – but thankfully is backed by the same immortal Isaac Hayes theme music.

Shaft 2000 is a cop, a cop who does things his way; and as always ’but dammit he gets results (You stupid Chief!)’.

In the film Shaft is on the case of the race-related death of a young black man allegedly at the hands of a rich white man named Walter Wade Jr (Christian Bale).

An open and shut case is stymied when the one key witness – a waitress named Diane Palmieri (Toni Collette) goes into hiding once she realises that Wade will use whatever means necessary to ensure she doesn’t talk.

Wade Jr is the son of a rich property developer, he is aloof, pompous and arrogant. Bale doesn’t even try to give him a redeeming edge or worthwhile qualities, which is a plus and a brave move. At one point Wade Jr basically throws offers of assistance back in his wealthy Father’s face…

When Wade jumps bail and skips the country Shaft momentarily loses his famous cool, getting busted back to working the streets as a result. 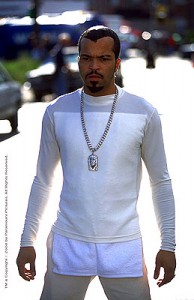 This brings him into the radar of a vicious small time kingpin named Peoples Hernandez (Jeffrey Wright). Peoples is organised and ambitious and aspires to owning more than the local neighbourhood – he also steals the movie, but more from him later.

When Wade inexplicably comes back to America and is immediately nabbed it looks like the whole thing is done with, but the trial doesn’t go according to plan, and with eyewitness Diane still missing it looks like Wade may walk…

… and you know Shaft ain’t having that!

Shaft 2000 is far more intricate than it probably needed to be, but that isn’t a bad thing because it resulted in Peoples being in the film. Wright plays Peoples supercool but with a menacing edge and a thick accent, all he wants is to move on up into new territory and to look after his “peoples”. While Wade is a strong character and played well by Bale it is Wright that is really the yin to Shaft’s yang in the film.

With three distinct ‘sides’ now in play – Shaft, Wade and Peoples – the middle third of the film brings them all into each other’s orbit. It also shows that there are shonky operators on all sides, and that is seems nothing will go the way anyone plans.

The last third of the film degenerates a little, with the true motives of all involved out in the open, gone is the complex posturing and positioning of the various sides in favour of car chases and shootouts with the usual ‘bad guys can’t shoot straight – good guys don’t miss’ rules.

It’s not important but I can’t not mention Busta Rhymes as Shaft’s off the books man on the street. He didn’t really need to be in the film other than to provide a loud and lively counterpoint to Shaft’s low key cool, but it proves Busta can act – a good thing because his hip-hop career has been abseiling a little in the last 5+ years.

Shaft isn’t great, it is a little too convoluted at times and I could have used a little less of the forced race-related ‘humour’, but it is better than I expected and Shaft is indeed The Man.

The film made some money, Sam Jax is always a solid box office draw and a fair indicator that the film will be entertaining – so I guess I’m flummoxed that this film didn’t warrant a sequel. And now Sam is in his 60s and pumping out Avengers flicks I guess we’ll never get to see another ‘black private dick who’s the sex machine to all the chicks’ until Hollywood runs out of remakes and starts remaking the remakes.

Final Rating – 8 / 10. A solid cast, an intricate storyline and some bang-bang to end proceedings. The result is a film that is better than it probably deserved.