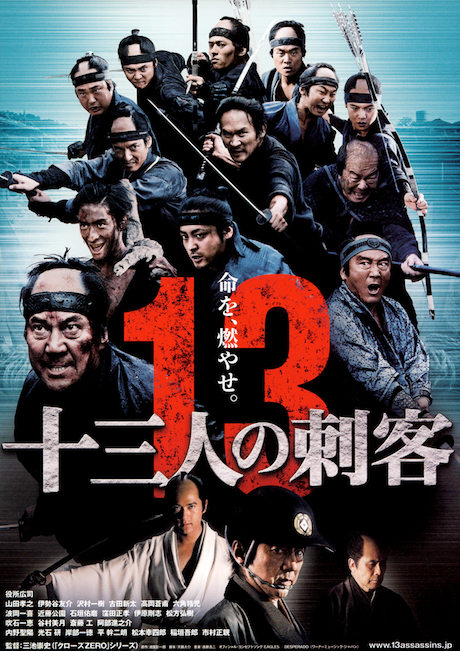 More assassins would have required a fold-out poster…

This might prove unpopular with the ‘cinema aficionado’ set, but if 13 Assassins was made in America with an English speaking cast it would be merely another film. In this case though it is made by renowned gonzo Japanese director Takashi Miike, 13 Assassins boasts a surprisingly straightforward plot and tones down his usual theatrical gore in favour of equally cringe inducing offscreen violence, before a prolonged battle sequence ends the film.

Is it bad? No, but it isn’t as awe-inspiring as I’ve read. In fact the prolonged battle that ends the film becomes repititious, confusing and cliched, and is probably as long as the Battle of Helm’s Deep without actually earning the right to be so indulgent.

It is peace time in Japan, troubling times indeed for out of work samurai and ronin – swords for hire – but I guess not a bad time for those that don’t like to be cleft in twain by sharp steel blades or skewered by errant arrows. Swings and roundabouts.

This tenuous peace is threatened by a rogue, who despite his heinous activities and generally reprehensible nature is deemed untouchable due to being related to the shogun, who far from reprimanding him for his constant mistreatment of his minions actually plans to promote him, giving him more power and more scope to misuse that power.

But even the most connected of bad guys can only continue his naughty ways for so long, and as we are shown more than once in the early goings Naritsugu is an especially callous and cruel ruler, and his casual slaughter of those he should be protecting is becoming perilously close to inciting revolt.

A ritual suicide in protest only draws more unwelcome attention to the area and Naritsugu’s exploits. This leads another leader Sir Doi to quietly seek a solution to this problem. As so often in these situations the solution is to have Naritsugu killed. And the samurai are back in the game…

The leader of the group is Shinzaemon Shimada, a noble and principled samurai who follows a code that is constantly being restated and relayed to the new members of the group, some of whom have become a little rusty with all this accursed unseasonal peacetime.

No prizes for guessing how many samurai and ronin that Shimada accrues, though at the outset of the mission they are but twelve in number, and they plan to take down Naritsugu as he takes his annual trip to his homeland, where he said to have up to 70 soldiers in tow.

The dozen death dealers are a mix of the old and young, experienced and raw, principled code-followers and mercenaries. They each boast different skill sets but have one thing in common, once ‘signed up’ they all commit to putting their lives on the line to ensure the mission is a success.

Honour, duty and glory and death by the sword. Such is the way of the samurai.

The problem for Shimada is that Naritsugu has under his employ a samurai bodyguard of his own. He is Hanbei, a man that might not approve of the way his master runs the show, but one who remains loyal and dutiful at all times because that is what being a samurai demands. Hanbei and Shimada have a long history that stretched back to their youths, so when Hanbei hears that it will be Shimada that is in command of the expected ambush he realises that they are faced with a worthy adversary. Naritsugu on the other hand is disdainful of the threat and sees an imminent attack as a welcome distraction and another chance to inflict pain upon others.

So now everyone knows it’s on. It becomes merely a case of when, where and how.

The where is Ochiai, and the titular (now) 13 assassins arrive early and commence preparations, giving us ample time to learn about the motivations and thought processes of the individual samurai. Thought processes that are altered a little when they learn that it is not 70 men that they will be facing, but over 200.

The battle itself is well over 40 minutes long and features some sequences that are to be frank reminiscent of the classic 80s TV series Monkey, with many assailants alternately attacking and being attacked by one or two samurai, and running from and chasing same. Obviously being a motion picture and not a tacky TV show there is quite a deal more violence, but with so much going on it is more the hack and slash type.

(On an aside I often wonder why the reflex action caused by taking a sword slash to the body or face is to turn and lurch toward the camera… or maybe that is because if you go the other way we can’t see the makeup effects?)

In true few men against many fashion no assassins are killed in the early stages of the battle, despite that being the period where they are most heavily outnumbered, and Naritsugu’s henchmen die quickly and quietly. Once the battle progresses far enough that it is time for some good guys to die in order to increase the dramatic tension they obey the rules too, with their deaths being long and drawn out and just long enough to spit out some dramatic last words. I should also point out that in a long dangerous battle the samurais rarely are simply outmatched or defeated in a fair fight, it is often an unseen sneaky killer who manages to take them down in moments of vulnerability.

By the conclusion of the film when the 200+ becomes single digits all involved have perhaps earned a noble death, and thankfully the film ends where it should. I thought the early stages of 13 Assassins more effective than the drawn out finale, Naritsugu was truly an evil man deserving of a brutal fate, and his many misdeeds were more effective as they were often offscreen – even if the blood was usually most definitely onscreen.

The finale became a challenge for Miike to stage an elaborate prolonged battle using as many faceless minions as necessary, while many have gasped at the audacity of such a long sequence I can’t help but feel that culling 15 minutes of pointless Monkey style shenanigans might have kept my attention longer.

Final Rating – 6.5 / 10. I found much to admire about 13 Assassins, but repeat my assertion that if an American equivalent was made it would be consider merely another film, and the seemingly endless battle that ends to film would be decried as unnecessarily violent and indulgent.