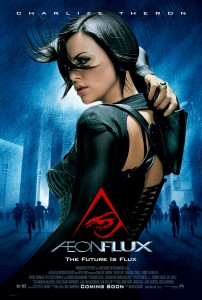 My what an impractical place for a holster.

This was such a dog that I’m sure someone in Hollywood was shot after it flopped. And so they should have been. Aside from ensuring Charlize Theron would don an increasingly ridiculous – but form fitting – series of outfits the plot was never going to be any better than banal; ‘another virus has wiped out 99% of the population and the survivors live under the tight control of an oppressive regime’. Really? Again?

‘Outnumbered but determined rebels take on the oppressors, but find that perhaps not all that it seems. They turn to the mysterious leaders who pass them information for the truth’.

Seriously? How is any of that going to ever be more than average?

Here’s what you will remember about Aeon Flux if you’re lucky:

If you’re really lucky you’ll remember nothing. You’ll repress any recollection of having seen this. But ‘cause you gotta laugh, here are some things that might be worth pondering: 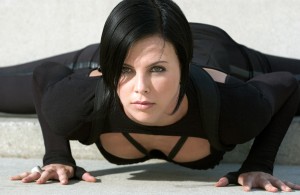 That’s about it. Aeon moves about like a video game character throughout the film even when there is no reason for it and they spend so long introducing everyone and clumsily getting things in order that by the time something finally happens you’re either too confused or simply don’t care.

Put another way, the biggest drawback is that the filmmakers took this all seriously, a few ‘boing’ sound effects and a few net nerd jokes and this could be passed off as a bad MTV joke. But when the lead characters take everything dead seriously and all walk around spouting inane dialogue and looking perpetually confused, what chance does the viewer who remembered Aeon Flux as a cool 4 minute cartoon on telly have?

As a result Aeon Flux is like the rest of MTV to me these days, expensive looking, full of bright colours and pretty young people (Yeesh Charlise in the bodysuit!), loud, noisy and unnecessary.

Final Rating – 5.5 / 10. Those that label Aeon Flux as ‘the worst of’ anything are wrong. There are worse movies every year. It just really really sucks.