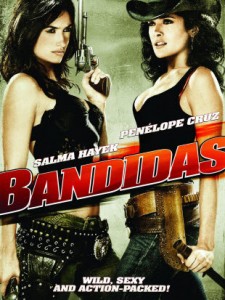 Blah, blah and wa-hey check those out!

Let’s be honest here. Were the makers of Bandidas expecting women to queue up to watch two female cowboys in a light comedy?

Were they expecting critics to seriously consider a film where the two sexy bandidas take turns at practising kissing on a captive Steve Zahn for awards season?

Who have I left out? Perhaps Bandidas was made to attract an audience that thought the two leads Salma Hayek and Penelope Cruz were a bit of alright?

OK look back up at the poster a second.

So why bother waiting for half the movie before the two fiery senoritas masquerade as scantily clad can-can dancers to infiltrate a hotel?

In other news, you won’t believe the lengths I will go to watch Salma Hayek jiggle…

The plot I guess has poor farmer’s daughter Maria (Cruz) teaming with well to do Sara (Hayek) to rob from banks owned by evil white American bankers for the benefit of the impoverished Mexican peeple.

Dwight Yoakum plays the lead scuzzy banker on a shameless land grab, and Steve Zahn a Sherlockian forensic analyst in a role that he would both loathe having on his CV – and remember fondly (see the bit about the two scantily clad dancers thrusting their can-cans in his face).

Unfortunately for the previously isolated target audience of males 18 – 50 there are really only four reasons to watch this film, and they are only on display in that one tease of a scene. The rest is dull and predictable fare about rich girls learning lessons about real life and white guys being taught lessons by hot babes. Hot, fully clothed babes…

I dunno if I’d rather a cheap T&A filled otherwise snoozer or a strictly PG, cleavage free cowdy film with a gender reversal from the norm?

Actually I sure do know. And it sure ain’t the latter that I was looking for. If you promise shameless shenanigans with hot mamas you best remember to bring the shameless.

Final Rating – 5.5 / 10. Remember me asking why they wait half the film to have the only risqué moment? The answer to the q is that by then we’ve already long since paid for tickets. I won’t make that mistake again… although I most certainly will.