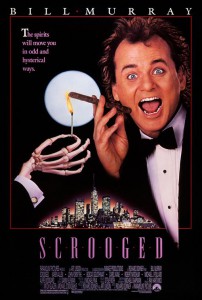 A prime example of how putting the right guy in the right role can make a crap film at least worth a look, similar to Ace Ventura and even Bad Santa somehow imagining another guy in the lead role just isn’t quite right.

In saying that Scrooged is quite middling standard fare, there is precious little that is new or any radical elements, but there is something if you are a fan of Murray.

Murray plays Frank Cross, a head of production for a major unnamed TV network, Cross is a prick, whether they all are is unknown, but he is. In favour of ratings through any trick in the book, including fear, and willing to do just about anything to cut costs, especially if they are his own. He is a tight, mean, unfeeling wanker with short arms and deep pockets, his employees loathe him but can never let him know this, his loyal secretary Grace is overworked and underappreciated, and none-too-happy when her bonus is not forthcoming, he even short-shrifts his own brother when it comes to Christmas presents.

That brings us to the fact that it is indeed nearly Christmas, and Cross has decided this Christmas might, nay must be a ratings juggernaut, he proclaims early that potential viewers need to be so scared of missing their programs that they will do anything in their power to be home in front of the tube. News that an ad for the Christmas Eve lineup was so graphic and dramatic that an old woman had a heart attack is met with the big thumbs up and a smile.

So when Cross is visited in what he thinks is a dream by his long since dead ex-boss and told that he will be visited by three ghosts he thinks he is simply working too hard, after all that couldn’t be right could it? Not even movies are that cheesy…

To calm him down Cross calls on the only person who was ever able to keep him grounded, his ex-girlfriend Claire, only they broke up due to Cross’s stupidity and arrogance, and she is still single 15 years later. Despite the circumstances of their split Claire seems genuinely happy to see Cross and it seems that her calming effect will calm Cross down a little.

Then he starts seeing things. Then the big boss of the network decides to give Frank a go-getting crowd pleaser as his 2IC for the season as the job is simply too great for one guy. Then the ghosts arrive…

The first ghost is the driver of a haunted taxi, being a ghost will do that to a taxi, he shows Frank moments from his past and how things might have been if his dad wasn’t a bastard couch potato who shattered young Frank’s idealistic bent.

The second ghost is a violent barbie doll of a fairy, who punctuates her shrill sqwarkings with sudden violence. She shows Frank how his actions impact others including Grace and her young mute son, his brother and his friends and a nice homeless guy who reached out to Frank earlier that evening but was rebuked.

The third ghost is a big scary puppet (just the facts) who shows Frank what might become if he continues down his current track. Look I don’t think they are spoilers if a film is based very closely on a centuries old world renowned novel.

Just as it seems everything in Cross’s life is destined for shit, his career, his relationship with Claire, family and staff, he sees the light, just as we sorta guessed he always would.

Of course everything works out and Frank learns the error of his ways. And to all a Merry Christmas.

Aside from Steve Martin no other mainstream actor could have played an unlikable prick and made him so likable, Sandler proved that with Funny People. Murray belittles, mocks and puts down anyone that dares be nice to him or shows him respect, including the dead – and once he turns around and regains the Chrissy spirit his overcompensation over the last few minutes of the film is worth the rental price alone. Scrooged is not going to change your life, it might not be much more than a way to kill 90 minutes, but it wouldn’t even do that without Bill Murray.

Final Rating – 7 / 10. I still don’t believe in Christmas, but I believe in the power of Bill Murray. Halleluyah!