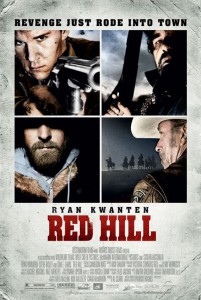 Won’t any of you be serious? I’m just trying to take your picture here.

If Red Hill is really Australia’s crack at making their (our?) version of a Western flick, why not pick a better story?

The basic premise of Red Hill is still made half a dozen times a year in the States and usually results in an – at best – vaguely entertaining 90 minutes of derivative plot events and so-so action. So the fact that Red Hill provides exactly that, only with Australian accents, shouldn’t come as a big surprise.

Yay Australia, we can make films just as mediocre as Americans can!

Shane Cooper (Ryan Kwanten: Apparently a famous actor now?) awakens for his first day on the job at his new posting in Red Hill, located in scenic rural NSW. Had he known what was coming he would have thrown a sickie or simply rang in faking a flat tire and stayed home with his pregnant wife.

On arriving in town he heads to the local cop shop where it is fair to say things are fairly loosey-goosey. Laid back. Cazhhhhh-ew-alllll. How relaxed is it? Well there’s a horse out the front for “not really” emergencies! Cooper is told to report to the Sergeant – a no nonsense guy named Billy (Steve Bisley) who immediately chastises the younger officer for neglecting to sport his firearm.

Considering how quiet the town seems this appears a little over the top, but how things are about to change…

The local news report informs one and all that a one Jimmy Conway, a local aboriginal tracker, has escaped from prison in a town far away from Red Hill. Regardless of the great distance between them and without explanation to Cooper an emergency meeting is called. Without giving anything away to Cooper, Billy calmly informs the assembled men that Conway is expected to hit town in 6 hours and that they should prepare for a hostile reception.

Arrangements are made to stake the town out and to set up a perimeter to nab Conway before he arrives, Cooper is given an unlikely entry point to make sure he remains out of the way.

Try Loreal… because you’re worth it.

Of course shortly after this Cooper ends up on the wrong end of a barrel and he finds himself eye to scably eye with Conway, a menacing, disfigured, single minded assailant. Conway makes his way past Cooper’s ineffectual “roadblock” and sets to reintroducing himself to the locals.

From here on the film is pure Western: the ornery newcomer heads down the main street, watched closely by men hidden in various locations including the rooftops. The locals all realize just how this will all go down yet no back up is called for. Countless faceless victims fall to this face-less (thanks to the disfigurement) killer, and for a great while no-one really knows why.

Of course all will be revealed in due time… it’s more a matter of if you can remain involved until the grand unveiling of the truth.

In reality nothing about Red Hill is bad. Sure it cribs from many other films and doesn’t really have enough thrills and spills to account for just how familiar this all is, but it is at least reasonably entertaining and has a couple of decent moments. But this hardly represents a continuance of the great recent run in Aussie film started by Animal Kingdom and continued with the unheralded minor gem Triangle (which is so good I’m claiming it for Australia even though it was a joint production with the UK). I’d end up putting Red Hill as a notch below The Horseman, not bad, not good.

Just mediocrity with a familiar accent.

Final Rating – 6.5 / 10. Has a couple of creative moments, but nothing stands out enough to demand your attention, and the “twist” was obvious before it was even hinted at.