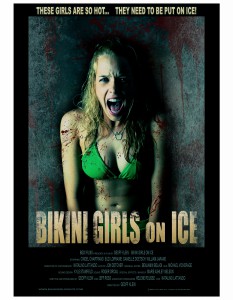 Screams pointless teen nudity doesn’t it? At least it did to me…

Some cray-zee dude at servo

Where should we set up car wash?

Some die, you won’t care.

Chicks all fug-ly, keep kit on

Final Rating – 2 / 10. Perhaps the worst film I’ve seen in years. Low budget, no quality, no talent. I hated everything about it.

But no nudity in a film called Bikini Girls? That I can’t forgive!

The Class of Nuke ‘Em High 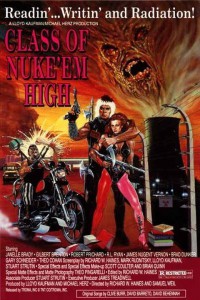 Troma films are famous for cranking out low budget exploitation to secure the teen market looking to rent “edgy” videos. This is one of their most notorious.

Naught go-ing for it

No scares, laughs or val-ue here

Final Rating – 4 / 10. Look I understand everyone wants to root for the underdog, the little studio getting by with creativity and gross out humour and effects. But if I give credit where it is due it is only fair to give a bagging where it is due. Aside from the catchy name and shock value this has little going for it – not even curio value. 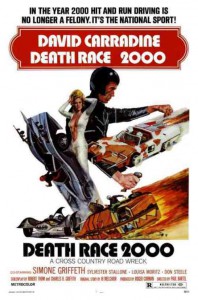 After watching the Paul W Anderson “reimagining” a few weeks ago I thought I’d check out the original schlocky inspiration from the 80s.

A fu-ture race, coast to coast

No holds barred, no apol-o-gies

Points for kills and speed

No class-ic but worth a look

Final Rating – 5 / 10. Bad jokes, cheap effects, tough guys, pretty nude gals and gore – now this is a real B movie and knows it. The dated effects and cheesy dialogue and plot only add to the curio value. (I was amazed just how faithfully the recent remake was to the core elements of the plot here.)

Oh and a young Sly Stallone and an already old David Carradine are in it – not that this fact makes it any better or worse.

And with that, I’ll see ya next month.

While I try to throw a joke or two into proceedings when I can all of the opinions presented in my reviews are genuine. I don't expect that all will agree with my thoughts at all times nor would it be any fun if you did, so don't be shy in telling me where you think I went wrong... and hopefully if you think I got it right for once. Don't be shy, half the fun is in the conversation after the movie.
View all posts by OGR →
This entry was posted in B Movie Haiku Reviews, Crappy Movies, Film, Movie Reviews, The 7th Level of Suck. Bookmark the permalink.