The Silence of the Lambs (Review) 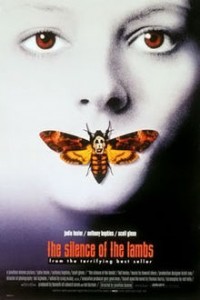 That explains the silence part, but it's not a lamb?

A number of Oscars and one of the more memorable psychopaths in cinematic history render any banal positive reviews of The Silence of the Lambs unnecessary. Therefore I will keep this brief and try to throw in a chuckle or two.

Silence of the Lambs is a masterpiece in characterisation and lean filmmaking. If you think about it the characters portrayed are either vital to the story or mere window-dressing, there are no in between ‘sorta’ supporting roles.

Without Hannibal’s input SotL might still be a solid FBI procedural ‘go-geddim’, it just wouldn’t be near as memorable. Hannibal doesn’t display many other signs of normal body language, he remains bolt upright and his arms and hands rarely move about. Hopkins’ performance is all eyes – a steely gaze during conversation changes instantly to a wide eyed glare during times where ‘you’d better listen’. His speech is quick, clipped and crisp, though he hangs on to the last syllable of every important sentence as if he’s afraid that ending it won’t allow time for another. 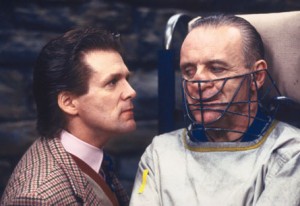 Even though Hopkins’ screentime is very short he also gets all the best lines and is the core of the most memorable sequences.

After a perceived discourtesy to young Clarice enrages Hannibal he throws her a bone and her investigation progresses more rapidly. Along the way she learns more and more about Buffy B, and in a few solid scenes so do the audience, most notably the oft parodied ‘self analysis’ whilst wearing a lovely pink negligee.

Clarice begins the film as a nervous rookie in a grown man’s environment, that of the testosterone dominated FBI ranks. She ends the film a seasoned pro who has seen things that 99% of the population couldn’t possibly fathom.

Without labouring on the plot developments the final sequence contains a masterful misdirection that will shock and hook you in until the closing credits, and even though we now know that the sequels didn’t really deliver you were definitely left wanting more of Hannibal at the time.

There are lots of close ups during dialogue scenes that demand that you pay attention, and given the gory and disgusting subject matter Demme wisely keeps a leash on the violence and macabre to save the impact for the more important scenes near the end. He does though keep reminding us of the thematic elements with the occasional head in a jar, skinsuit or my favourite, the unnecessary throat-moth.

I am not a director’s aficionado. I subscribe more to the “I don’t know directing, but I know what I like” motif, that leads me to follow the careers of certain guys more than others. But The Silence of the Lambs is lean, mean and memorable and obviously exceptionally crafted.

Final Rating – 9 / 10. Very rarely do truly challenging films find both commercial and critical success – especially if they contain ‘unpleasant subject matter such as this. Silence of the Lambs managed both, on top of all that it is still as strong and packs as much of a punch some 20 years on.