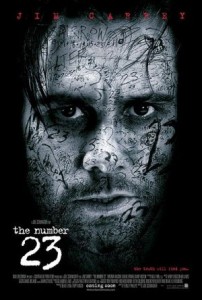 Ya got something on your face there Jim-Boy.

In many ways it is the opening credits that will define your potential enjoyment of this film.

Said credits show a dark and ominous backdrop with frequent world events and happenings that are linked back to having association with the titular numeral. For (a made up) example; if event X happened on September 14, or 14/09 (I’m Australian), the film would show 14 + 9 = 23, somehow lending credence to the argument that the date is linked to the event.

There are those watching that might say “My that’s a long bow to draw, there are literally millions of events on record, pick any number and you can find hundreds that suit your purpose. We could just as easily be watching The Number 76!”. The second viewer might say “Wow, all those things happened that can be linked back to one number!” in astonishment.

To those Viewer Type #2 people I say only this; welcome to your new favourite film, and might I also point out Coke and Pepsi are the same, go ahead and taste them while I wait if you don’t believe me…

Right the gullible are gone for a while. I am Viewer type #1, so this all seems like a whirling mess of ridiculousness to me, although I must say for a brief while it is mildly compelling ridiculousness in a similar vein as Primer and Pi, two other films with non-credible (I can’t say incredible – you’ll get the wrong idea) plots that are somehow oddly watchable, even riveting, despite making precious little sense.

Jim Carrey plays Walter Sparrow, an animal control officer who runs late for an outing with his wife after being bitten by a dog named Ned – who seems to reappear through the film at relevant times to reinforce the seriousness of his situation (Viewer #2), or illustrate the fact that this film is ultimately very silly (Viewer #1). While waiting for her husband wife Agatha chooses a second hand book from her bookstore that she decides to give to Walter to read – again either an impulse decision caused by boredom or punishment for keeping her waiting.

The book is called ‘I owe it all to my big Ass’, by Kim Kardashian…

No. Wait. It’s called The Number 23. Walter sets about reading it (though it must be said if he was as immersed as he appeared he could plough through the skinny book in a couple hours, not the many weeks as shown in the film). He finds many parallels in the hand written story and its characters from his own childhood and young adulthood, alternately informing and alarming Agatha and his teenage son of the numerous similarities. 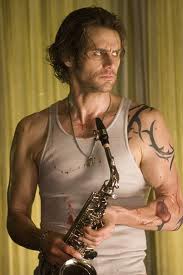 As Walter progresses further and further he starts envisioning events from the book in his mind, populating the characters with people from his own life, thus real Walter and Agatha become the cast of the novel, thanks to Walter’s imagination (and the fact that the film shows us his daydreams in noirish black and white scenes).

The problem comes when the mental re-enactments and real life start becoming blurred.

As with the hard talking, hard living hero of the novel, Walter allows 23 to take over his life, finding references to it in almost every facet of his existence, he quickly becomes obsessed and infatuated by it.

Walter – and the film – find themselves unable to function without continued references to 23, and linking the happenings back to the number becomes an increasingly tenuous and tedious regularity. And this would be bad enough if last half hour of the film didn’t spiral inexorably towards a ridiculous and contrived conclusion. Which it does.

The Number 23 starts as a mildly intriguing concept, but ends as a frustratingly silly exercise of interest only to hopeless ‘math-heads’. For all I know every 23rd viewer might love it – apparently Jim Carrey is firmly a believer in the power of the number.

Final Rating – 5 / 10. If you must watch The Number 23, be aware there is almost as much sex as there is confusion… and I was really confused.