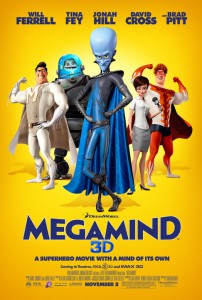 In the interest of fairness I am contractually obligated to disclose the fact that Megamind was always pushing uphill to get me to admit that I liked it – I loathe Will Ferrell and think he is the most over-rated supporting character actor ever to be inexplicably elevated to stardom.

I also have a problem with Dreamworks compared to Pixar – in fairness everyone compared to Pixar – but Dreamworks specifically make sure to cram a few unnecessary pop culture references into every film and occasionally let think a well known song will do the work for them. That is definitely the case here, AC/DC being the musical crutch-du-jour for Megamind’s sequences.

Perhaps most heinously Dreamworks have the tendency to value “names” over “voice acting ability”. The Madagascar movies feature the laziest voice work in animated history with the four leads basically reading dialogue in their own voices.

Could they possibly be guilty of that with Megamind? Let’s think…

Ferrell, Brad Pitt, Ben Stiller, Tina Fey, Jonah Hill… D’ya reckon???
Given my first statement above it should embarrass the filmmakers that EVERY SINGLE ONE of the above voices was instantly recognisable, and only Ferrell even attempted to change from their regular voice by even the merest inflection – he used his Mugatu from Zoolander voice – he only has four voices…

Megamind was over-the-top pompous 90% of the time and #3 the rest, every other character he has ever played is a combination of either 1 or 2 plus 3.

Megamind deals with a pair of arch-enemies that have been pitted against each other since birth. Megamind (Ferrell) is blue and wiry with a water dispenser for a head and a little goatee. Metroman (Brad Pitt) is your muscular Dorito shaped All American type – brave, handsome and well spoken and willing to do anything to maintain the peace and safety in the city of Metro City.

In their respective youths they each were forced into different pathways, Metroman found a more privileged and loving upbringing, and Megamind unfortunately found himself in different, less favourable surroundings, that of prison since toddlerhood. After a decade or so of being rivals with Metroman and failing, Megamind decided that rather than growing up an outcast he should embrace his circumstances and go all out as a bad boy… makes sense I guess.

(In this vein Megamind has unavoidable similarities to the recently released Despicable Me, both featured wannabe supervillains planning global conquest and oddly enough both having sidekicks named Minion! In this film Minion is a talking fish who drives an invisible car and uses an automated body to get around. Given my opening statement it should surprise no-one that I liked Despicable Me more, and given the option would pick up that DVD every time in future.)

On and on for years the two battle, Megamind hell bent on implementing his various nefarious – but this is PG so not so scaryious – plans, and Metroman forever there to foil them. A frequent bargaining chip in such battles is cute n spunky young TV reporter – and presumed love interest of Metroman – Roxanne, something that infuriates her young cameraman Hal (Jonah Hill: playing a cartoon character looking surprisingly like… Jonah Hill).

Megamind and Hal similarly resent Metroman, Megamind as he continually thwarts his plans for global domination, and Hal as he presumably thwarts Hal’s plans for Roxanne domination.

At the conclusion of one of many Good Vs Evil battles Evil finally triumphs to the surprise and shock of everyone… not least of which is Megamind himself. After the briefest of possible “Yay we won!” montages featuring both the villains, bystanders and innocent civilian reactions to this unexpected development Megamind rapidly comes to the conclusion that getting exactly what you crave all the time is no fun… apparently – sounds pretty good to me. It seems that without his archrival and nemesis Metroman that being the undisputed ruler of all he surveys has lost a bit of fizz.

Without the ying to his yang, his “you complete me”, his “you had me at Hello” – OK I went one too far but you get the picture – Megamind lacks a sense of purpose.

With this in (mega)mind a plot is devised to simply create a new nemesis from scratch, so that Megamind and co can have someone to battle against. To exact his new diabolical scheme Megamind must through necessity don various disguises to move undetected through Metrocity. It is while in mufti that he runs into both Roxanne and Hal (separately), due to Megamind’s not being 7 foot tall and blue they are none the wiser at who they are conversing with. As they interact and get to know each other better past biases and hatreds are forgotten and friendships are unwittingly forged.

Of course as this is a movie Megamind’s carefully laid plans are always doomed to inevitable backfire, leading to further conflict and unexpected developments that amaze and astound us all – but not really.

I can’t go further without flubbing what little plot exists, suffice to say that it was reasonably straightforward and that the twists were seen coming from a mile away. The voice acting was as mentioned simply horribly lazy, Ferrell was the only one who even had a crack at creating a different voice for the role, only as it was one from his limited repertoire it grew annoying swiftly.

Pop culture references and catchy songs frame the more memorable or hooky scenes, and precious little of the remainder was either memorable or amusing. I normally find at least one character even in the most lazy animated feature to like – in the pointless and plain bad Monsters Vs Aliens it was Bob, in Despicable Me it was the Minions – but here I found nothing and no-one.

The shame here is that because Megamind and Despicable Me are so similar were released so close together that comparison are inevitable it means that we must unavoidably play the two films against each other, and that scrutiny basically shows just how derivative and unnecessary BOTH films actually are.

Final Rating – 5.5 / 10. Animated comedies featuring big name stars. Welcome to the successor of the B horror film. It doesn’t matter if you’re lazy, boring or just plain bad – until people stop going to every single one in mindless drones the quality will inevitably get worse and worse – leading to films like this.

And what the fuck is it with the “everyone dances over the end credits” thing? It isn’t bad, just reeks of “same”.