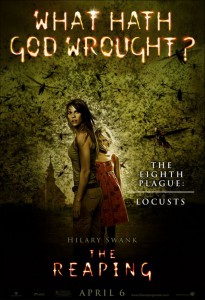 Where do I start. Do I try to justify having a crack in a difficult genre or just bag them for missing so badly?

Do I give points for trying to treat the ludicrous premise seriously or slap them for thinking it could work?

The first third of The Reaping attempts to set a realistic tone. Kathryn (Hillary Swank) is a respected investigator called upon with disturbing frequency to debunk what at first appear to be religious miracles through scientific anaylysis. At one point I think she said 18 investigations for 18 non-miraculous explanations.

18? That’s a lot of Jesus-shaped Doritos or bleeding slices of toast!

Kathryn’s sidekick is Ben, a large black guy who lived through a miracle of his own – he was shot 6 times and survived – and didn’t make a rap album afterwards!

They are called upon to investigate a non-wind related happening in N’awlins where an entire tranche of river has gone red with blood, killing all the fish. The local guide Doug is a religious man and claims it is a sign and that more will follow. He and various other locals point the finger at a 12 year old girl who lives nearby with he Mother after being ostracised from the community.

So far, so what? The tone is indeed set, which is why the rest of the film is such a punchline.

Here is a laundry-list of what follows:

Ben is at heart a churchgoing man and his conviction, and seemingly the rest of the community, is at odds with Kathryn’s “Go Science!” affirmations. As things devolve further and further into ridiculosity Kathryn’s troubled personal past is revealed, and what is real or a dream/vision is brought into question. Also every time something goes wrong the little girl seems to appear nearby, panicking the townsfolk further.

Finally Kathryn busts out the “I mean business” tanktop and the truth (and her cans) are revealed, capping off a frankly laughable – for all the wrong reasons – last hour of the film.

It seems that sometimes if you look hard enough the truth will eventually reveal itself. It’s just that too often in these films the “truth” is plain dumb. 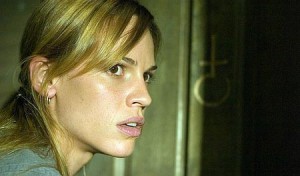 "Raining FROGS? Geez I need to read the scripts before signing."

Final Rating – 5 / 10. Hillary Swank always seems to sport a quizzical expression – on this occasion it is obvious why she is upset. The Reaping blows.