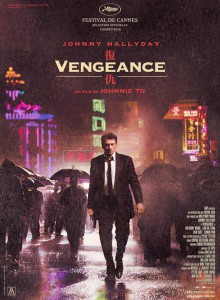 I do love the poster!

It’s the same pre-credit sequence that has kick-started dozens of films over the last few decades: a happy and loving couple are gunned down for apparently no reason in brutal fashion – although in this case they take the next step and include the two young cute children in the massacre to increase the stakes.

Now the rest of the film will be about who is the most pissed off and desperate for revenge.

That guy is Mr Costello, the French father of the critically injured mother, her two children and husband all not surviving the killing. I should point out here that at times the language switches between Chinese, French (with subtitles) and English. The film takes place in Macau but while the Hubby was Asian, the wife – and Costello’s daughter – was French. I don’t know why I found this interesting but I did, but it doesn’t drag you out of the story.

In true vigilante fashion Mr Costello eschews the traditional law and order approach to finding the killers, after a chance encounter at a crime scene Costello declines the opportunity to bring a killer to justice and instead tracks down the accused to enlist him and his team to help find his daughter’s family’s killers. An odd form of ambulance chasing indeed!

The new trio of bad guys agree to hop on board after Costello promises them cash and the restaurant he owns. They start using their contacts and trade secrets to get swift results, during the process it becomes evident that the 65ish Costello has skillz of his own – even if they haven’t been utilised for quite a while.

So why doesn’t he track them down himself? Well aside from his lack of inside Macau knowledge Costello’s advanced age has caused memory issues in a similar vein to that of the lead character in Memento – he too takes photos and scrawls on them for reminders, meaning he can be a little ineffective once he has a “turn”.

The plot is reasonably formulaic with only subtle variations on  the usual sequence of events – a major shootout is delayed by the arrival of several of the combatant’s kids. Vengeance has a couple of nifty battles where various minions are picked off with clean kills while the main characters are lightly wounded with bloody clothes being the only lasting sign, until near the very end of the film where the Reservoir Dogs rule – that of “most/all must die” kicks in.

Final Rating – 7 / 10. Take a pinch of SPL, add the core elements of Taken and a dash of Memento and you have a pretty good um… ahhh… Vengeance film. I guess they nailed the title.