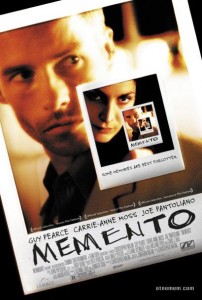 Movie promoters nowadays go one of two ways, they either want to remind you of other popular (usually better) films or attempt to convince you to see their film by saying it is different to anything else that you’ve ever seen. You can be as sceptical as you like with option one, (and I for one usually am), especially when they trumpet “by the guy who made Jingle All The Way“, or some similar crap.

Option two is even more criminally overused, The Mighty Ducks 3 all of a sudden is sold as a revolutionary change in filmmaking and anything with even one differentiating concept or idea is “ferociously original”. Take Dead Snow for example, the movie is a cookie cutter shoulda been straight to DVD mediocre 80 minutes, but got a cinema release for one reason, “Nazi zombies”. Suddenly a movie 99.76% the same as many others is called original and fresh.

Looking at the DVD cover for Memento I was surprised to see that none of those adjectives were used, as this is one movie made in the last decade where it is justifiable. The movie could have been made in a more traditional way, with some judicious flashbacks or the omission of select details until the end to preserve the twists.

The route Christopher Nolan took though makes Memento one of the better films of the millennium so far, not that there has been a huge amount of competition to this point.

Guy Pearce is Leonard, the central figure in the film and the focal point of every scene. It’s a pretty big ask to expect one guy to carry almost 2 hours of cinema but Pearce, terrible hair and all manages to carry it off. Pearce also handles the narration, but rather than just tell you what’s going on he mumbles to himself almost under his breath, and pauses and backtracks at time like he’s developing a script to be formally presented at a later stage.

Leonard experiences a real version of Groundhog Day, waking up each morning with no recollection of any events since a particularly stressful event that of the murder of his wife. There were many ways that this could have been played, but Christopher Nolan threw every “standard” method aside and sets the film out back to front, so the very first scene that we witness is the “final” scene in the film, and every scene prior is a reverse explanation of the plot.

So as mentioned in the opening minutes Leonard kills an acquaintance named Teddy for his wife’s murder, with again the remainder of the film explaining the preceding events back to the very origin of Leonard’s decision.

Confused? At times you will be, but if you pay attention you’ll soon twig and learn how to follow events, and it all makes perfect sense eventually.

So while these events are being told in reverse, a few minutes at a time, with the start of each scene being blended into the final seconds of the previous one, there is a another plotline moving forward (kooky huh?) which loosely explains a similar situation to Leonard’s. In a former life Leonard was an insurance investigator, the guy who investigates large claims to ensure that they are not false or fabricated, his very first case involved a claimant named Sammy, whose condition was remarkably similar to that of Leonard’s.

So while Leonard’s storyline unfolds in reverse, it is intercut with a relatively simple, yet parallel story which helps explain what Leonard goes through each day.

Leonard retains his sanity through repitition and routine, he is unable to make new memories so periodically his mind resets to the previous default, and his recent experiences and conversations vanish permanently. Handy if you’re a disgraced politician standing before the jury, annoying if you’re a guy trying vainly to solve the murder of your wife. To remedy this situation Leonard writes down important information and takes photos of prominent people and places in his life on polaroid, where he also jots down there name and significane to Leonard. For reeeealllly important information Leonard gets phrases and key points actually tattooed on his body. The amusing thing is that each morning, after he wakes up and looks for signs as to where he is, Leonard rediscovers the tattoos and repieces together the events and goals of his life.

So we know that Leonard kills Teddy in the end at the start, but why we don’t find out until the very end at the start. Got me? But rest assured this isn’t a flick that rests upon one clever gimmick. It is understated, intelligent and favours a solid story over glitz. The acting is strong and though you have to follow the story a little more carefully than say Hannah Montana, it is far more rewarding when you eventually peice together the fragments and realise exactly what lead to Teddy’s demise.

I recently had a late night semi-drunken convo (I was drunk, the other guy wasn’t), where the topic of movies came up. We went through various classics (at least as we saw them) over the last few decades and my mate – let’s call him Super-Mario – wondered aloud why I felt the need to buy DVDs of every movie that I really like, rather than just rent them or catch them when they are on TV. I thought about it for a minute, explaining initially that a lot of my flicks are hard to come by, and that sometimes I just feel like watching Die Hard or The Blues Brothers at short notice.

Eventually however I decided that I don’t even know why I need to own some movies, Batman Begins and Toy Story will always be available for rent, and barely a week goes by without a couple of the films that I own showing up randomly on the TV. More baffling still is that I own movies like A Night at the Roxbury, yet truly good films like The Usual Suspects and Memento can’t wheedle their way into my rotation.

In the case of Memento I should probably remedy this, at least before I grab Lesbian Vampire Killers off the shelf.

Final Rating – 8.5 / 10. One of the better films of this decade to this stage, made all the more enjoyable with the deft direction.