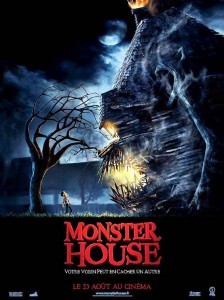 Odd promotion technique: Have a poster scarier than anything in the film.

I’m a sucker for decent animated films, the key word there though is decent. The fact of the matter us that most animated films these days simply don’t qualify as even decent. The Shrek sequels, the Madagascar sequel, Planet 51, Monsters Vs Aliens – all lazy and plain bad.

Aside from the inevitable Pixar excellence the only decent animated films to arrive in the last few years are Over the Hedge and Cloudy with a Chance of Meatballs… and this.

It seems that once you are no longer a toddler (let’s say 6+) but not yet a teen that you might be a bit of a tween, too old for the baby-ish stuff and too young to really appreciate the 8th through 12th Harry Potter films where Harry comes of age;

So from 6 through maybe 12 there just aren’t too many films available for junior. They either slum it and continue hanging with Dora and Diego, or watch movies with the teenage brothers and sisters and get messed up by Saw or whatever those kids are watching nowadays.

But with Monster House your 8 year old now has their very own haunted house story, and it’s a pretty good one.

DJ and Chowder are buds around 10 or 11. DJ is slightly nerdish but excited by the prospect of staying home by himself on Halloween while his parents are out. Chowder is a disgusting doofus with little self control and even fewer manners – in short he is a 10 year old boy.

The neighbour over the road is a cantankerous old curmudgeon named Nebercracker (Steve Buscemi). He looks like Gollum, openly detests little kids and is maniacally protective of his home and his large front lawn, confiscating any toy or ball that ends up “trespassing”. It should be noted here that in a short span of time balls, kites and bikes end up soiling Nebercracker’s frontage.

Now when I was 6 I must’ve played a million hours of basketball with almost no control or skill – I think the ball might have gone into the neighbour’s yard maybe 5 times. With 3 times in one afternoon I can almost understand why he might be just a little grumpy.

After Nebercracker has a turn while attacking the kids it seems he is out of the picture, and the boys panic fear they will be blamed for his untimely death. They try to explain themselves to the babysitter Elizabeth (Maggie Gyllenhall – better looking as a drawing than as a real person) and her yob of a boyfriend Bones (Jason Lee) – probably with a Z, but with no luck.

The something odd happens. I turns out that Nebercracker was only one of their worries, perhaps even the least of them. His actual house is also alive and angry, it seems to blame DJ and Chowder for the death of Nebercracker.

And it wants revenge.

So that’s where babies come from?!

During the film we will see the house eat balls, dogs, kites, trikes… and stoners. When it tries to snaffle a young red-headed girl selling fund raising snackies the boys step in to save the day. They decide once and for all that they must end this.

But how do you fight a house? Well the first thing you do is consult the local video game guru for advice. Then it seems a combination of avoiding the cops, babysitters, parents and getting “eaten” all help in some small way. Unfortunately for the kids this house is practically a 2 storey weatherboard Terminator.

None of the action or “horror” should upset any post-toddler kids, say maybe 5 or 6 and up. The dialogue is appropriately kiddie, actually the dialogue over the entire film felt more apt than most animated films where the kids/animals/monsters talk like they are all university professors or pro skateboarders.

Chowder is the fat annoying kid that there was at least one of in every class growing up, he just doesn’t get it yet but basically doesn’t care. In a small way that is indicative of Monster House as a film, it is hardly a marketing dream “Killer house eats kids”, doesn’t scream “parents come and watch” and lacks the cutesies that Pixar and other wannabes have. But it doesn’t seem to care, it’s funny, fast paced and at times quite clever. Not in the Pixar league, but a cool little film nonetheless and perhaps a little underappreciated.

On the DVD I had there was a 5 minute featurette that showed exactly how the film was made, motion capture mostly (like Jackson did with Gollum), that more than anything showed me just how non-traditional this film was, and actually made me admire the chances they took even trying it even more.

Final Rating – 8 / 10. Monster House is a film without a true home, too scary for the munchkins, maybe not scary enough for the pre-teens, but it deserves a look and is a good film – even if it lacks an audience to validate it.