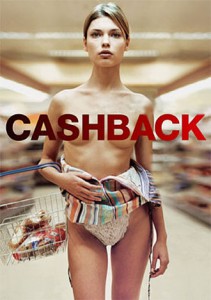 A budding artist has the ability to stop time by simply “thinking” it so.

He uses his ability to undress the inanimate and frozen women in the supermarket where he works… so he can paint them. Thankfully there are many hot women who frequent his supermarket and they all appear at once in the same aisle, all facing the camera too.

While that’s not what the movie is about, it is probably enough reason for you to watch it.

Ben is the afore-mentioned arty guy. He seems like a nice low key bloke. He has just had a screaming argument with a woman he dumped after a long relationship, it should be noted he wasn’t the one screaming.

With his newfound unwanted spare time and an inability to get to sleep Ben decides to kill two birds and get a late night job at a supermarket to pay some bills. He imagines that time stops in order for him to get through the night, leading to the scene above.

Again this isn’t the main part of the story – but in reality I struggle to tell you what is. This is like 100 minutes of stories about a bloke named Ben and his mates, none of them are particularly entertaining or memorable – but the stories stop occasionally for flashbacks or memories of random titties.

You still reading or have you rented it yet?

There are a bunch of characters and some similarities to the shenanigans and hijinks that minimum wage employees get up to, but not many of them are amusing. The only character that was actually memorable and a little funny was a guy who claimed to be a karate expert, only we never got any real proof one way or the other.

The film has some solid visuals and some inventive segues between scenes – but just like Ben’s life it seems to be going nowhere most of the time.

Final Rating – 6.5 / 10. It’s pleasant enough in it’s own way, but in reality aside from the sporadic nudity there isn’t that much to recommend.