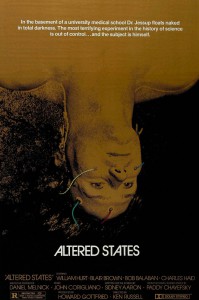 Somebody ignored the “This Way Up” sticker.

Pi did it well.

Primer did it well.

Requiem for a Dream did it well.

Inception was better than most but in the end fell victim for trying too hard.

Quentin Tarantino is the next guy in danger of trying too hard.

It should be no real surprise that most of the films above dealt with sci-fi elements and mostly tried to place them in a normal setting, Altered States does just that and in doing so it mostly defies a simple explanation.

William Hurt plays brilliant scientist Eddie. Eddie is so analytical and focused on his own studies that he ignores almost anyone who does not grasp the complexity of his knowledge. This means that he has very few friends aside from research buddy Arthur. Eddie is also very aware of his own brilliance and character flaws, but makes no apology for them, even to his nearest.

Eddie and Arthur have experimented with a 7 ft tall upright “human test tube” that looks like a lot of hot water systems. The subject, usually Eddie floats alone in the tank for extremely long periods, wearing a glass helmet for oxygen while Arthur monitors his lifesigns. The aim is to see the impact of long timeframes on the mind, in Eddie’s case it seems to be weird quasi religious imagery that is apparently quite intense and realistic, and as mentioned before, just plain weird.

As well as being brilliant Eddie is blunt and bold, at a party Eddie picks up an intrigued young woman named Emily. She realises that Eddie is not your garden variety geek or nerd and seems willing to put up with his eccentricities and quirks.

Fast forward many years: Eddie and Emily, now happily married and living in what appears to be marital bliss with kids in tow. They live together but share separate lives, spending long times apart conducting their research. In typically analytical manner Eddie has decided he can achieve more without the burden of family, so he informs Emily that he wants a divorce so he can focus more on his study of the presence of God through scientific research.

Things progress rapidly when Eddie travels to Mexico to share a chemical-assisted freak-out with the natives there. After his bizarre experience Eddie takes some of the “medicine” back to the US for testing and further research where he is told by another Doc named Mason that he has lost the plot.

Regardless the dogged Eddie again contacts Arthur and utilising a new isolation tank recommences his studies.

Prior to this the film was merely bafflingly strange, now it ratchets up the freak-factor to 11, in short if you were confused or annoyed to this point you’ll hate the rest.

Eddie’s experiments with the drug seem to take on a life of their own, instead of just being mental Eddie is convinced that he himself is undergoing physical change in the tank, something that is given greater credence when he emerges from the tank in another form altogether. Instead of being afraid or reluctant Eddie simply ramps up the testing and carries on, ignoring warnings and common sense.

But unbeknownst to all involved Eddie decides he must have one last test.

Altered States often makes no fucking sense and requires more than a few leaps of faith. Eddie almost constantly babbles along excitedly using what sounds like scientific explanations and reasoning, but 90% of the time you either decide you are along for the ride or switch the film off. What helps is that the cast seem to believe wholeheartedly in what is going on around them despite the absurdity of most of the events, that makes it easier to swallow. After all a few years back a whole raft of things seemed too wacky to be possible, now we use many of them in our everyday lives.

I might draw the line though at finding God through science though, but if it does happen Altered States might be revisited as being extremely prescient.

Final Rating – 7 / 10. You can write it off as batshit crazy or give it points for being daring, brave and different. In this case the film was so sincere that I give it props for trying. You might not be able to grasp it all but it is almost always at least interesting.